How Wolves Briefly Had A Ball

An image of the young Ball - in Blackpool colours.

Even the best of them sometimes get it wrong. In the case of Stan Cullis, we can put the name of Alan Ball down as a rare stain on a magnificent managerial career.

Wolves had the firebrand red-head in their grasp as a 15-year-old and it was to their great regret over the years that they let him slip away following more than two months of trial matches and training in the West Midlands.

Ball spoke when on after-dinner duty at a Molineux function a decade or so ago of his heartbreak at being released. Now, we can put some flesh on the bones of the story.

The late midfielder’s autobiography Playing Extra-Time reveals how he was aproached by eagle-eyed Wolves scout George Noakes and offered the ‘wonderful opportunity’ of reporting to Castlecroft on Saturday mornings and in school holidays.

Codsall-based John Doughty was among the same batch of 1960 trialists as Farnworth Grammar School’s most famous old boy and had a prolonged close-up of him in action.

“Alan was very small and very quick,” he said. “He had lots of endeavour, presumably passed on by his dad, who was a manager in non-League football at the time (with Ashton United) but would often be on the touchline urging him on if it was an evening game.

“All football fans will remember that high-pitched voice. Well, it was higher still then and I recall him yelling ‘Terry, Terry’ when he wanted a pass from Terry Wharton.

“I was alongside Alan when he played in his first practice match, with Ken Knighton in the other team. I was an inside-forward as well and have programmes showing me at no 8 and him at no 10, and vice-versa. 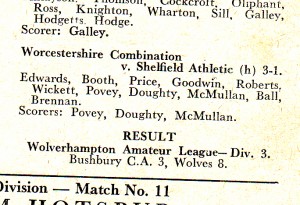 Food for thought for Wolves fans.....a line-up from the Molineux programme in September, 1960.

“In between us at centre-forward was a South African lad called Tommy McMullan and I think the only decision to be made with Alan was whether he would grow to be big and strong enough.

“I remember us playing four or five games together, including against Bournville and Shelfield Athletic in the Worcestershire Combination team. He was obviously a good player.

“Eventually, Wolves released him, though. Alan’s book says it was Stan Cullis who wrote the letter but I’m sure there would have been recommendations from the coaches and George Noakes because they would have seen much more of him than the first-team manager did.

“I don’t recall any farewells. I didn’t knock around with Alan off the pitch and he just slipped off back to Lancashire. It would have been because of his stature, not his ability.

“It’s a shame because we all know what a great player he became with Blackpool, Everton, Arsenal and others, as well as with England of course.”

Ball, whose haul of 72 international caps took in most of the victorious World Cup campaign in 1966, including the final, died in April, 2007, aged only 61. He had caused Wolves plenty of pain down the years, not least by twice becoming the country’s costliest player.

He won and converted the late equalising penalty in the FA Cup fourth-round home tie against holders Everton in February, 1967, when a 53,439 crowd generated record Molineux gate receipts of £17,130. Ronnie Allen’s side would have had a visit from Liverpool in the next round had they hung on for another 12 minutes.

Then he scored two goals and made one when Wolves were beaten at Goodison Park just after their return to the top flight later that year. 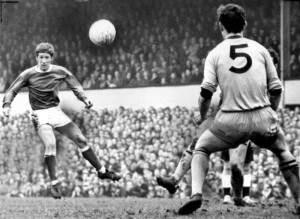 Ball, who shared digs with Barry Stobart at the home of Eddie Clamp’s mother in Waterloo Road, spoke warmly in print of his Molineux experience.

“Wolves was a dream place,” he added. “They were the team of the generation. Everything about the place produced a tingle of excitement. Even sweeping the corridors was a thrill.

“Castlecroft was a bowling green of a pitch and I was so chuffed I could handle myself, a boy among men.

“I loved watching the big stars who would pat me on the head and ask how it was going. Roy Swinbourne once said: ‘How are you doing, little man?’ But disappointment was around the corner….”

* Tough-guy forward Tommy McMullan (see above) was accompanied by a friend called Neil Scott when he came to England from Johannesburg more than half a century ago.

Scott, by major coincidence, was at John Doughty’s house last weekend, having married a Wednesfield girl, who has recently died.

“Neil wasn’t with Wolves – he was just here as friendly support for Tommy,” Doughty added. “But he has friends in the area as well as family on his wife’s side. He also has a son in Ireland.

“Tommy is still alive and rumoured to be back in Joburg.  Neil, who built up a successful transport business, stayed in touch with him for a long time but has been living for the last 30 years in Port Elizabeth.

“Wolves obviously had a very successful link-up with South Africa at that time and Tommy was about the only one of the imports who didn’t make it with them.”