Cullis – Not A Man To Be Messed With! 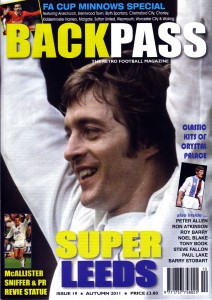 A publication that comes highly recommended.

An insight into the life and times of the extraordinary Stan Cullis highlights the typically strong Wolves content in issue 19 of the retro magazine Backpass.

As if we needed any reminder that the Iron Manager was not a man to be crossed, it has come with an article by the former Express & Star sports editor Steve Gordos that centres on his long-time colleague Eddie Griffiths.

Griffiths, who was covering Wolves for the paper around the time of their 1980 League Cup triumph, was working in the town as a news-hungry freelance in 1958 when he ventured to write in a national publication that no fewer than eight of Cullis’s players were unhappy and considering transfer requests.

The story was hardly likely to go away quietly as it appeared under the headline ‘Wolves Transfer Bombshell’ – and this at a time when the club were on the way to winning the League Championship for the third time in six seasons.

In a scene that mirrored what Brian Clough did in front of startled journalists at a Derby v Nottingham Forest game many years later, Cullis ordered the named players – Ron Flowers, George Showell, Gerry Harris, Jackie Henderson, Micky Lill, Ron Howells, Cyril Beavon and the Scottish forward Bobby Thomson – into the boardroom to speak to Griffiths and other pressmen.

Thomson was unable to attend because he was having treatment but the others, to a man, insisted they were happy at Molineux and were not seeking moves.

Gordos, a Wolves watcher going back to the 1950s, nevertheless draws one or two interesting conclusions. He discussed  the altercation once or twice over the decades with Griffiths, who died in the mid-noughties, and suggests that it might have been a case of ‘no smoke without fire.’ 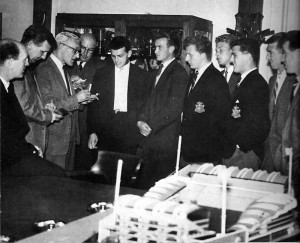 The bespectacled Express & Star reporter Phil Morgan addresses Wolves' players after they had been summoned to the Molineux boardroom by Stan Cullis (far left). Eddie Griffiths is between Morgan and Cullis.

She recalls the celebrations that followed Stobart’s surprise appearance in the 1960 FA Cup final victory over Blackburn and says: “At about 2am, Barry and I went for a walk and sat in a coffee bar just looking at his medal. Eventually, he took me back to the Regent Palace Hotel (where the WAGS stayed) and he went back to the team hotel. There was no hanky-panky in those days – Cullis would have gone nuts!”

For those who dare to look, the highly popular 64-page magazine takes a look in an extended section on FA Cup giant-killings at Wolves’ nightmare 1986 exit against Chorley. Another featured game that might sit more easily with the Molineux faithful is Albion 2 Woking 4!

Details of how to purchase Backpass can be obtained by clicking on the advert on the right-hand side of this page.