Road-Show That’s Decked Out In Gold And Black 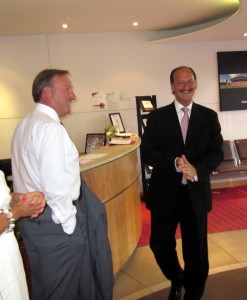 Steve Daley (left) and Kenny Hibbitt, together this summer at a London Wolves' reunion dinner.

Molineux legends of the 1970s are preparing to do the round of local pubs and clubs following the launch of a road-show run by a Wolves-supporting businessman.

Steve Daley has been central to the venture, appearing with Kenny Hibbitt at the Bird In Hand, Tettenhall, to help raise money for Compton Hospice and then lining up alongside Hibbitt and John Richards at the Copthorne Hotel in Brierley Hill at an evening from which the Dudley Group of Hospitals benefitted.

Now, more dates are being sought – either from charities or sports clubs who are looking to stage fund-raising events.

“We have had another couple of enquiries and would love to hear from other organisations,” said Sedgley-based promoter Steve Saul.

“We’re lucky that these guys have such tremendous stories to tell. They obviously served Wolves at a successful, eventful time in the club’s history and are entertaining and very interesting to listen to.

“We normally start the night with a quiz and also have a game of ‘true or false’ as well as staging two half-hour question-and-answer sessions with the lads, who are also happy to meet fans who have autograph and photograph requests.

“I have run sporting dinners as well for many years and was delighted to work out the other day that my company have raised £36,000 in 2011, largely for charities and sports clubs. 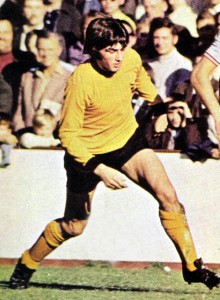 John Richards....in the mood for nostalgia.

“We were pleased to raise around £200 or so for Compton Hospice at the night we held late last month and would like to hear from others who are interested in the idea.”

Saul and Daley are working closely on the project, the latter having seen Derby heroes such as Roy McFarland and Archie Gemmill working with their former team-mate Roger Davies – a Wolverhampton-born Wolves fan – on a similar venture in the East Midlands.