Where Size Does Seem To Matter 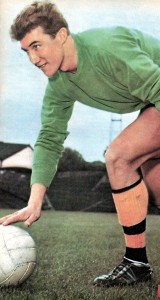 Back in the 1960s, our travels with Wolves had us poring over match-day programmes that had a certain uniformity.

Wherever we went, we seemed to read the same pen pictures of our players – identical descriptions whether we were at Newcastle or Southampton.

A key man behind those items was Tony Pullein, who also used to write the southern news for the late and lamented Soccer Star. Of all the things he penned, I best remember one piece from around 1965 that said how amazing it was that ‘Wolves have four goalkeepers on their books who are at least 6ft tall; Dave Maclaren, Fred Davies, Phil Parkes and Bob Knight.’

Without quibbling over the matter that Fred was variously described elsewhere as 5ft 11in or 5ft 11½in, it did seem remarkable that there should be so many ‘giants’ vying for the position at a single club.

Looking at this season’s Premiership rosters, there is only one keeper who is below 6ft – a certain Dorus De Vries at Wolverhampton Wanderers, who is 5ft 11in. It has become the norm for keepers to be verging towards the enormous.

When I had dreams of being a professional keeper while standing a mere 5ft 8in, I would always take comfort when I read that the small guys were more adept when dealing with ground stuff, if not the high crosses.

As Bert Williams told me when I interviewed him for my In Keeping With The Wolves book: “I was very much on the small side, which was a really sore point with me. I did repeated stretching exercises.” And he grew to 5ft 10½in.

So, I wonder, how have goalkeeper heights changed over the years? Reaching for my trusty annuals (Empire News, News of the World, Rothmans, Sky Sports), I have looked through the decades to find this distribution of keepers of a given height in the top division:

So, back in Wolves’ FA Cup winning season of 1959-60, there were two keepers on the books of top-division teams who were only 5ft 8in. Six were a mere 5ft 9in. And so on. Notable among the ‘shorties’ were Eddie Hopkinson (Bolton) and Alan Hodgkinson of Sheffield United, both of whom also played for England.

At Wolves, there was one of the relative giants in first choice Malcolm Finlayson (6ft 2in) while reserves Geoff Sidebottom and John Cullen were listed at 5ft 10in, which, at least in the case of the former, might literally have been stretching matters. But what a fine and courageous keeper, he was.

A glance at the table shows just how the species has evolved. Heights have literally inched upwards.

In 1969-70, we had Joe Corrigan of Manchester City at a formidable 6ft 5in and our own Phil Parkes at 6ft 3½in. In the table, I rounded all values up to the next whole number.

At Wolves, we have had plenty of keepers who weren’t particularly tall. Kevin Charlton was listed at 5ft 9¼in, Jim Barron at 5ft 10½in (his father had been a professional keeper at 5ft 8in). Rod Arnold and Phil Weir were others who were listed at 5ft 10in. And, of course, the beloved Budgie, John Burridge, was 5ft 10½in at most.

Has this shift to gargantuan stature marked a preference for bigger guys, who are better able to fill a goal? Or is it simply a reflection of the fact that the footballer, in general, has grown bigger? Cue some more research….

I compared the heights of all outfield players in the top division in 1959-60 to those of 2011-12. The open circles in the diagram indicate 1959-60 and the closed squares the current season. Clearly, there has been a big shift upwards.

Half a century or so ago, the average height was between 5ft 9in and 5ft 10in, with lots of short ‘uns. Now, the average is 5ft 10in to 6ft, with very few players measuring less than 5ft 7in.

Yet we can think back to all the great smaller guys at Molineux. Billy Wright was 5ft 8in, Mike Bailey 5ft 7½in, Norman Deeley 5ft 4¾in, Chris Crowe 5ft 7¼in, Andy Thompson 5ft 4in, Derek Parkin 5ft 7in, Les Wilson 5ft 7½in and the Irish Jimmy Kelly 5ft 6in. Hughie Curran was only 5ft 9in and John Richards not much taller. And, of course, there was Paul Dougherty at 5ft 2in. 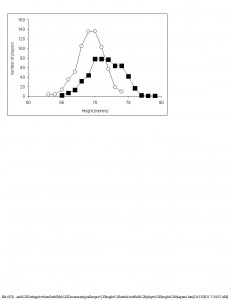 Is it simply a fact that the entire population is getting bigger?

One last comparison….the average height of keepers in 1959-60 and now, as compared to the average height of outfield players. It seems that, for keepers, we have gone from 6ft to 6ft 3in as middle of the range. For outfielders, it is from 5ft 9½in to 5ft 11in, although there does seem to have been a much greater spread of heights in recent years, with plenty of elongated players – think Stefan Maierhofer.

On balance, then, keepers are becoming proportionately bigger as well. But are they getting any better?