Striker Signs Up For ‘Blue Army’ 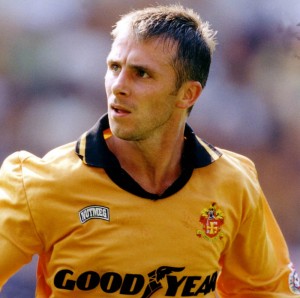 David Kelly undertakes a football trip with a difference this week – as a reminder of the life-changing journey he almost made two and a half years ago.

The former Wolves striker, who is watching plenty of games while in between jobs, heads to Belgium on Thursday to watch Birmingham’s Europa League clash with FC Bruges.

But the invitation to travel would have been irrelevant had he and his family not pulled back from the brink when poised to emigrate Down Under in the the second half of 2008-09.

“We were five days away from flying out,” Kelly said today. “Our flights were booked and we had five-year residency visas sorted out for Australia.

“Then Billy Davies got the Nottingham Forest manager’s job and asked me to go there with him. We had made our plans on the proviso that any reasonable job offers came first, so we shelved the trip.

“But the idea of setting up home over there is something we will look at again in the future because we think it would be fantastic to spend some time living abroad.”

Kelly’s tenure in the East Midlands ended early last close season, since when Davies’s successor Steve McClaren has also departed to leave ex-Wolves midfielder and coach Robert Kelly looking over his shoulder at the City Ground.

And, as the former Republic of Ireland striker wonders where his next opportunity might come, he is making an unusual addition to his round of games.

“I have two friends who are Blues fans and asked if I fancied joining them at the game in Bruges,” he added. “As it’s an attractive venue, I said yes, so I will be taking my place in the supporters’ seats.

“It will be an interesting change from all the Championship and League One matches I’m watching over here, although there is a balancing at.

“It is important on the one hand to stay abreast of players and teams, so you’re ready to jump straight in if asked to do so. But it’s only right on the other not to keep being seen at grounds where managers are considered to be under pressure. That can be awkward for everybody.

“I’m often asked whether my next job – assuming it comes – will definitely be with Billy Davies. The answer is that I would keep my options open and not rule anything out.

“I’ve spoken to him about this three or four times and he’s very interested in personal development, so he would expect me to consider something that presented itself without him. 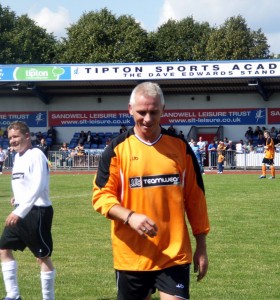 'Ned' at a charity match at Tipton in July.

“I do very much enjoy the coaching and management side of the game and consider myself fortunate that I’ve only had 14 months or so out of the game since first coming into it as a player in 1983.”

Kelly, who lives in Sutton Coldfield near the Wolves duo of Steven Fletcher and Jamie O’Hara, hasn’t visited Molineux since making several trips last season, normally in the company of Andy Thompson.

But he has one other important date looming. He is organising a West Midlands all-star team for a match against Sutton Gate on Sunday, November 6, in aid of the John Taylor Hospice in Erdington. Thompson, Steve Froggatt, Tony Daley, Jamie Smith, Kelly and possibly Don Goodman are due to line up alongside the likes of Richard Sneekes, Geoff Horsfield, Gareth Farrelly and Gavin Ward.

* If you are looking for all the latest football scores, you should head to www.footballscores.com – they have live score updates from games being played all over the globe, so go now!