A Lock-In, Two Home Visits And A Pleasant Surprise

Our dealings, meetings and conversations with former Wolves players stretch well beyond the stories that actually appear on this website. Sometimes, paths cross purely by chance.

As a way of mopping up what’s left over after our regular offerings are published, we now continue the occasional series that we hope offers an interesting peak behind the scenes. 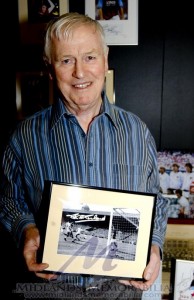 Peter McParland with a signed framed photo celebrating his two goals for Aston Villa in the 1957 FA Cup final. Picture courtesy of www.midlandsmemorabilia.com

Sat, Sep 17: The best-laid plans……I had made arrangements to meet early-1960s Wolves forward Peter McParland for the first time while he was on corporate duty at the Aston Villa v Newcastle game. Unfortunately, my car was locked in the press car park an hour after the final whistle and, by the time I’d alerted the security men and been able to drive out, Peter was gone. The afternoon did provide a close-up of another former Wolves man, though, and I was interested to observe talkSPORT’S Stan Collymore on the row in front of me. He stood up to applaud when the teams came out and then returned to his feet, arms outstretched, when Villa took the lead; not usually the ‘done’ thing in press boxes.

Mon, Sep 19: Had a chat by phone with Mike Bailey; not so much about football as over possible travel ideas in various parts of Europe for next summer.  He and his wife are very keen holiday-makers. The only time he stumbled in his advice was when he deliberated over whether he had been to Amsterdam and Copenhagen with Wolves.

Sun, Sep 25: Took advantage of a visit to good friends near Solihull by also dropping in again on Bob Hatton’s house and taking the chance to get a couple of photos signed. An absolute top bloke!

Tues, Sep 27: Have been giving John Richards a little more space than usual. He and wife Pam have had their daughter Kim over for three weeks or so from Australia with her girls, Emma and Lydia, and have had a nice family break at Center Parcs in Sherwood Forest. Phil Parkes has been spreading his wings rather than hosting. USA lover that he is, he is in Florida for three weeks.

Thurs, Sep 29: Bumped into Mel Eves outside Molineux while he was heading inside for a business meeting. Then set off down the M42 just past Birmingham Airport to make acquaintance with Derek Jefferson for the first time. An article to follow soon……

Wed, Oct 5: Was pleasantly surprised to receive a phone call from Barry Powell. Still disappointed that work arrangements had kept him away from Frank Munro’s funeral, he wanted to check some dates from Wolves’ lower-division title triumphs, which he contributed to as Graham Turner’s assistant. Turns out Barry was guest of honour at the recent Coventry v Blackpool game and enjoyed his half-time walk on the pitch at the Sky Blues – another of his former clubs.

Fri, Oct 14: Met up again with former Wolves youth player John Southall to return some keepsakes he had kindly loaned us for our feature on him several weeks ago. He was chuffed that Phil Parkes had recognised and remembered him when they met in the city centre a few weeks ago. Maybe they will be seeing more of each other. They use nearby coffee shops on the edge of the Mander Centre but Lofty’s preferred ‘watering hole’ has closed.

Sun, Oct 16: A fleeting mention, we promise, of Albion v Wolves; suffice to say that Robbie Dennison, Stan Collymore, Tony Brown and West Ham stalwart Tony Gale were among the ex-players circulating in the media area at The Hawthorns.