John Richards steps into the TV spotlight tonight for a reunion with one of the men Wolves vanquished in the first of their famous League Cup final triumphs.

More than 37 years on from his Wembley winner, the striker is on Sky Sports duty at Molineux as Wolves and Manchester City meet again in the competition.

Richards (far left) and other stars listen to Alf Ramsey during an England training session.

And he was delighted to learn that he would be seated alongside Mike Summerbee, a man he knows not only as a 1970s opponent but also from international football.

“Mike was in the England squad around the time I won my only full cap in 1973,” Richards said. “He played seven or eight games if I remember right.

“After I played against Northern Ireland at Goodison Park, I remember sitting next to him in the stand when we played Wales at Wembley in the midweek. His words to me were: ‘Don’t worry, John…..you’ll get another chance.’

“Unfortunately, that didn’t turn out to be correct but we did travel together on an England tour a few weeks later that started with the famous World Cup qualifying defeat in Poland.

“We went on to Moscow and Turin to play Russia and Italy, and Mike played as a substitute in the Russia game. I think I was on the bench as well. We certainly got to know each other through our international travels. He was a good lad but I haven’t seen him for years.”

Richards is a relative stranger to the punditry world, although he has occasionally worked as a studio expert before as well as appearing with Mike Bailey and Kenny Hibbitt’s on Sky’s popular ‘Time Of Our Lives’ series.

And, as he and Summerbee settle into the seats occupied by Dave Jones and John Toshack at Saturday’s Premier League draw between Wolves and Swansea, he is anticipating one or two gentle looseners.

“Hopefully, we will kick off with some talk of the 1974 final,” he added. “I’ll probably be more keen than Mike on that! 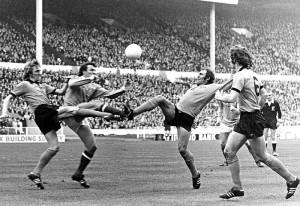 “Derek Parkin has repeatedly said that Mike was one of his toughest opponents and I played against him many times in Wolves-City games, although he’s a few years older than me.

“Normally, players from opposite sides would have a drink together after a match but there was no chance at Wembley in 74. We did our celebrating in the dressing room, then the teams went their separate ways for their own functions in London.”

One issue Richards doesn’t plan to raise – at least not on air – is the story of how Summerbee once had to dust himself down after being dumped on the front row of the old Molineux Street Stand by a crunching tackle from Dave Woodfield.