Jones At Home On Iberian Adventure

Wolves’ trips to Portugal down the decades have tended to come in batches.

Three times in the first half of the 1970s, Bill McGarry’s side went there to play ties in the UEFA Cup. Then, Dave Jones used Spain’s long, narrow neighbour for pre-season tours in two successive years in the early ‘noughties.’

Jones loves the country and seemed pleased enough to be able to make changes accordingly when a planned trip to Canada in July, 2001 fell victim to the foot and mouth outbreak.

He soon announced that he would instead prepare for his first full season in charge at Molineux with a training-plus-games trip to Portugal; not among the sun worshippers and golfers on the Algarve but an hour and a half north of Lisbon where Sven-Goran Eriksson has a holiday home.

A squad boosted that summer by the signing of Mark Kennedy had a surprise face in their midst as they departed from Heathrow on Friday the 13th – West Ham teenager Stephen Bywater.

The keeper was called up at the last minute as cover for Michael Oakes after the club suddenly pulled the plug on a £700,000 move for Dutchman Maikel Aerts. Also present were Molineux youngsters Mark Clyde and JJ Melligan but Kevin Muscat and Ryan Green were left at home because of injury. 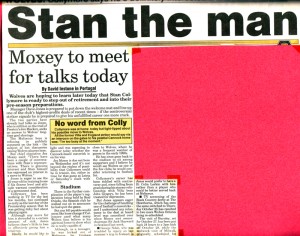 How the Express & Star covered the big tour story.

Jones, who had taken Stockport to the same stretch of Atlantic coastline several years earlier and has since done the same with Cardiff, had new goalkeeper coach Bobby Mimms on board as part of his backroom team and was soon busy running up a hefty phone bill.

He was in talks with Stan Collymore to try to tempt the enigmatic striker out of retirement and back to his first club – and even hoped he would do so in time to join the squad in Portugal. Hand in hand with that chase, the manager was pursuing Preston’s £5m-rated forward Jon Macken.

But it was one of Wolves’ existing strikers, Cedric Roussel, who made the headlines when the first game was drawn 2-2 against an Espinho side who had travelled 120 miles down country for the day.

Amid a flurry of four goals in 16 minutes around the interval, the Belgian hinted at better things following several barren months at Molineux by heading Kennedy’s cross in off the post, Carl Robinson’s chip equalising shortly afterwards.

A competitive game was played in the same tree-lined stadium that Wolves were using for training purposes two miles from their hotel. But it ended bizarrely when the referee, who doubled up as a local prison chief, led the teams off six minutes early.

Perhaps he had taken umbrage at the fact the visitors requested the kick-off to be put back a quarter of an hour after their bus was nearly 45 minutes late picking them up because of an oversight by hotel staff.

Two nights later, anxious to avoid any kind of repeat, Wolves arrived early for their second game, an hour or so away at Leiria. The fact kick-off was actually at 9.30pm rather than 9pm, meant they had a taxing two-hour wait in a near-deserted ground. 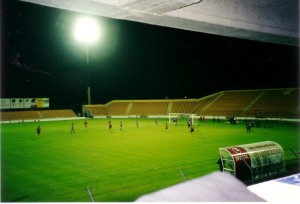 A rare Wolves attack against Leiria but where's the crowd?

And their mood didn’t improve when they played poorly in a 2-0 defeat which was watched by Jez Moxey’s during the chief executive’s whistle-stop visit.

George Ndah had by this time been sent home from tour for the second year running, a sore groin putting paid to his trip and leading to a summons for Colin Larkin soon after the young forward had signed a three-year contract.

Jones fixed his squad up the following day with a look round Benfica’s impressive Stadium of Light, where Andy Sinton had previously played in a friendly for Tottenham.

He then took them to his favourite fish restaurant on the way back. Not that the cuisine was necessarily to their liking. After sea-food had been served at the hotel the previous evening, one or two had nipped out to McDonald’s to fill the remaining gaps.

Paul Butler was acting as captain on tour in Muscat’s absence and confessed to having mixed feelings about Kennedy’s arrival. He was delighted to have the winger on his side but, as a keen Manchester City fan, was disappointed the Republic of Ireland international would no longer be firing in dangerous crosses at Maine Road.

Kennedy was the star turn in the final game – a 2-1 Saturday night defeat against Alverca. He, Tony Dinning and Temuri Ketsbaia combined for Adam Proudlock to divert home the opener after only five minutes and Wolves were impressive for long spells despite Bywater – also used in the opening fixture – conceding in the 18th and 35th minutes. 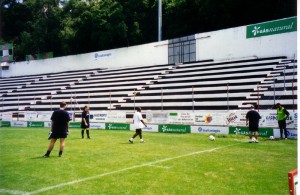 Wolves' players at work under the guidance of Terry Connor in the Caldas stadium.

In a game in which they used trialist Dejan Markovic, Jones’s side struck the woodwork through Kennedy and might well have had more goals themselves.

A record of one draw and two defeats was nothing to write home about and the manager wouldn’t have minded getting a bit more sun on his players’ backs.

But he was pleased with the trip as a preparation exercise for a campaign that was to start three weeks later at home to Portsmouth. In the meantime, he took his players travelling again, this time for a one-off friendly against Royal Antwerp.