Another Slice Of Madeira 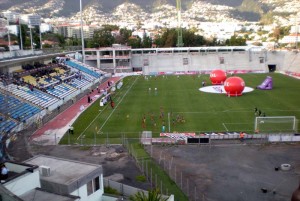 The Maritimo Stadium - pictured from up one of Funchal's many hills.

Almost 30 years ago, the Express & Star carried a series of articles by John Richards under the heading ‘A Postcard From Madeira’. Now we have email to help us. The former Wolves striker and managing director has just returned from a nostalgic return visit to the island on which he played Portuguese League football for Maritimo for two seasons. Here’s his account of the trip.

I first went to the beautiful island of Madeira when I finished my playing career at Molineux in 1983.

Maritimo had just been relegated to the Portuguese second division but, in the second of my two seasons there, we gained promotion back to the first division and the club have stayed there ever since.

We returned to Madeira for a short holiday in 1995 and did the same last week, when we found the weather was pretty much as we recalled it. It was in the low 70s and suitable for outdoor eating and drinking.

I was hoping to visit the club to see what changes had been made and discover if there was anyone still there who I remembered; more improbably, to see if anyone remembered me.

By coincidence, on the day after our arrival, Maritimo were playing Academica Coimbra, who older supporters might recall as the first team Wolves met at the beginning of our successful UEFA Cup campaign in 1971-72.

The stadium was still in the same place, uphill from the famous and elegant Reid’s Hotel in the capital Funchal, but in a strangely sad condition. Three quarters of the ground were being totally reconstructed but, due to the economic depression, work had stopped. So only the old main stand was in use.

It only seemed to contain home supporters, presumably because no Academica fans were prepared  to make the two-hour plane trip for a Saturday evening fixture. Maritimo won 3-2 and moved up to fourth place, behind the usual top three of Oporto, Sporting Lisbon and Benfica. 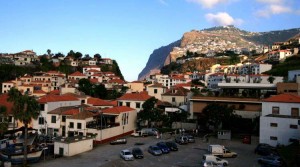 Not a bad place to spend a few days.

I contacted the former club president, Antonio Henriques, and arranged to meet him later in the week. In the meantime, we travelled inland in search of the old training ground, which used to comprise some antiquated changing facilities and a hard sand pitch. Only the main stadium pitch had grass.

What a pleasant surprise awaited us! A massive four-storey complex with a grass training pitch and a full-size floodlit artificial pitch alongside.

I introduced myself and was immediately taken to the main office area, where I was greeted like a long-lost brother. They produced a hand-written ledger detailing my Maritimo playing record and kindly copied it for me.

We were then given a guided tour of the stunning facilities, which included a huge indoor arena with seating for basketball and handball, and a health and fitness suite with physio rooms. One whole floor was filled by a school for 200 children aged from four to 10. The Maritimo administration had offices on the ground floor.

I was then introduced to the media manager, who arranged for me to be interviewed for Maritimo TV and to watch as they edited it in the media suite, even adding subtitles. My Portuguese was rusty at the best of times!

One of the coaches who had been the first-team keeper during my stay came out to renew acquaintances and we posed for photos for the club website. On departure, Pam was presented with a Maritimo shirt and scarf.

There was more hospitality to come when we met the former president at The Vine, a brand new five-star hotel in Funchal. One of the guests was the current club president Carlos Pereira, who had been a director when I was playing. It was the first time I’d met him since my last game there in 1985 – an occasion he remembered more for the celebration drinks afterwards than the game itself. We had won the second division after all. 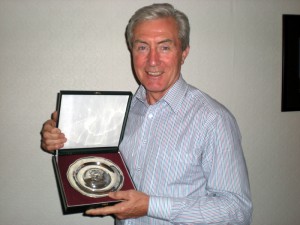 A nice souvenir to bring home.

Prior to dinner, I was surprised when the club’s media manager arrived and I was presented with a club scroll, detailing my playing record with the club, and an inscribed plaque. Cue more photographs for the Maritimo site.

To say the reception was overwhelming would be an understatement. Considering I had only two years with the club and we are now more than a quarter of a century on, the hospitality we received was very touching.

Our happy memories of Madeira have become even happier. My thanks to all at CS Maritimo and my best wishes to them for the remainder of the season.

And, don’t forget, if you see anyone walking round Wolverhampton or Telford in a vivid red and green striped shirt and scarf, it’s probably Pam.