Bull and Turner: Together Again 25 Years On

Duo Reunited Thanks To The Beeb 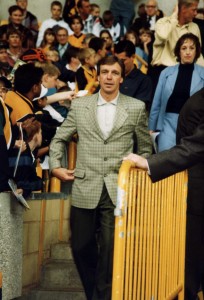 Twenty five years to the week since joining forces on their memorable Molineux journey, Steve Bull and Graham Turner have been back in each other’s company.

Come Sunday, it is exactly a quarter of a century since the two were brought together by an outlay that would eventually rise to £64,000.

And, to mark the anniversary, they have been reunited by BBC Radio Shropshire for some serious on-air reminiscing that was broadcast on Tuesday night.

In an interview by Nick Southall, Turner let on how embarrassment over his workplace prompted him to consider trying to do a deal before Bull and Andy Thompson – then both Albion players – had even set foot inside Molineux.

“The whole of the club smacked of defeatism and it (the stadium) couldn’t have been in a worst state,” he said.

“I was tempted to go and meet them somewhere else just so they wouldn’t see the state of the place.

Their debuts came in a 3-0 home defeat against Wrexham on November 22, two days before they witnessed the lowest point in the club’s history, a certain FA Cup defeat against Chorley.

The goals soon flowed for Bull, though, and he went on to recall for Radio Shropshire listeners what then passed for his financial negotiating skills.

“When I was called in by Ron Saunders at West Brom, I thought it was to be given a rise – not to be told Wolves wanted me,” he said. “I had scored three goals in five games for them (sic).

Turner opened up further on the joint deal by explaining the demeanour of the then Albion chairman Sid Lucas.

“I think he was in tears because he didn’t want to see the club’s young players depart,” he revealed. 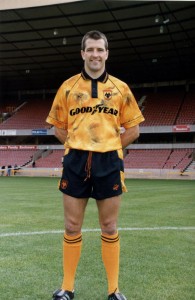 A youngish Steve Bull in the early 1990s.

“We had agreed a fee for Andy Thompson but Ron Saunders (then the manager at The Hawthorns) wouldn’t budge on Steve Bull. We made one last attempt, though, and Ron agreed to it.”

Radio Shropshire’s interview with Turner and Bull can be heard until early next week at http://www.bbc.co.uk/programmes/p00ldbwt

The programme, presented by James Bond, was marked by messages from Wolves fans in Barbados, Malta, Germany, Sweden and London after listeners were asked to point out where they were logging on.