A Varied Month With Old Friends

Not every meeting and phone call we have actually makes it into print on this website. Some conversations and get-togethers are for other reasons.

As a way of summing up this ‘any other business,’ we present part three of this new feature. 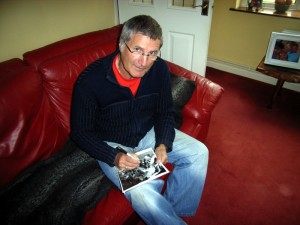 Tues, Oct 18: Dropped off on the way to Leicester v Watford to visit John Farrington at his home near Hinckley. Always nice, interesting company and eager to help where we can. He’s still keeps pigeons at the back – he is a north-easterner after all – but nothing like as many as he used to. John signed two or three photos I took for him from his Leicester days and talked me through one or two stories relating to them. I can visualise a Backpass article on him in the near future. Mike Stowell kindly sorted me a ticket for Leicester, where Sven is under mounting pressure. Chris Iwelumo played for Watford and I couldn’t believe Michael Kightly’s misfortune. Sent to the Hornets for match practice, he limped off after about 20 minutes.

Sat, Oct 22: Found out today that Geoff Palmer enjoys a Saturday morning lie-in. Having met him and Phil Parkes at the Viking Wolves dinner at Molineux last night, I was left with the task of taking to him the  t-shirt the Scandinavian visitors had had specially made for him before their weekend trip here. They had forgotten to present it to him last night! I knocked his door as quietly as I could for 9.15am and had no reply, learning several hours later that he doesn’t plan to be up and about that early at the weekend. Will have to make a return trip. I was delighted for the Viking members when Wolves salvaged something from what looked like being a disaster of a game at home to Swansea.

Mon, Oct 24: Went to see The Doc today…….Tommy Docherty. Had three hours with him at his house in the sticks south-east of Manchester, where he was waiting for me at the bottom of their road to show me the way in. He’s now 83 and was great company, full of stories and one-liners. I quickly realised that the material I was getting would sustain articles for two issues of Backpass, rather than one. He even told me I was okay to use any left-over Wolves stuff on this website. He was past his sell-by date when he was manager at Molineux in 1984-85 and my feature will be concentrating mainly on his time at Chelsea, Scotland and Manchester United, the latter of whom were thumped 6-1 by City yesterday.

Wed, Oct 26: Rushed back from doing research for a forthcoming project in the Daily Mirror picture archive at Watford to attend Wolves v Manchester City in the Carling Cup; an entertaining night despite the scoreline. John Richards was also there – in a studio in the corner of the ground nearest the subway as he joined Mike Summerbee in spending the evening working for Sky Sports. Not difficult to work out why they were both invited on, given a certain meeting of the clubs in 1974. 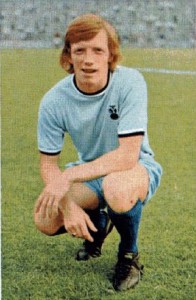 'Still got your boots, Willie?'

Sat, Nov 5: Bumped into Willie Carr in the press box at the Coventry v Southampton Championship game. He had the headphones on because he was doing some radio work as part of his day as a special guest at the Ricoh Arena. Inevitably, there were one or two comments to the effect: “Have you got your boots, Willie? We still need you playing.” Coventry actually had a good go in the second half and Sammy Clingan is doing well for them in midfield as their skipper. Steve Harrison is assistant to Amanager Andy Thorn and I’d love them to do well but have my fears.

Wed, Nov 9: Spoke by phone to Fred Kemp after receiving an email out of the blue from a Burnley fan who lives in Stoke. It’s a long story but he’s involved in a charity effort for a school building project in Africa that involves signed football cards from the 1960s and 1970s. Fred, Danny Hegan and Dave Wagstaffe are three of the cards he has unsigned so I’ll be trying to help him. Watch this space.

Mon, Nov 14: Have had the pleasant task of distributing some copies of Jim Heath’s excellent Wolves In 20/20 Vision book to friends in the media who have helped with publicity and promotion. Radio WM in The Mailbox was on my ’round’ today and they have kindly agreed to have him in the studio for a second time. Bumped into Steve Marshall, the Express & Star’s former Wolves correspondent, while I was outside the Beeb building. He had just emerged for some lunchtime fresh air.