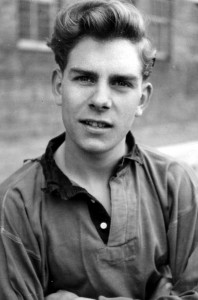 A young Bobby Mason at Wolves in the mid-1950s.

Bobby Mason, who we at Wolves Heroes have visited twice at his home near Burton-on-Trent, has become the subject of a fascinating article much further afield.

The publishers of an Essex-based magazine contacted us following a Google search and requested permission to reproduce a recent photo we had taken of the former Molineux inside-forward.

We were happy to oblige and have just taken delivery of The Chelmsford City Historian, a quarterly publication which has devoted three pages to the story, with said picture, of how Mason’s ground-breaking move south in 1962 had serious ramifications for his new club.

With no blame to them and no blame to him, the sporting dreams of a county town – namely, to have a side in the Football League – were put on hold for several years and, in fact, have never come to fruition; no wonder our friends in the south-east wanted to contact him!

Mason, having already faced the likes of Vorwaerts, Red Star Belgrade and Barcelona in a Wolves career of 173 games and 54 goals, is described at the top of the article as ‘probably City’s most controversial signing.’

The piece is written by Martin Rogers, who was covering the club half a century ago for the Essex Chronicle and who goes on to describe the capture of the Tipton-born 75-year-old as one of the biggest stories in the club’s history. Well, how many players are transferred from the First Division to non-League and then back to the Second Division?

At that time, transfer-listed players who would have commanded sizeable fees when moving from one League club to another were able to drop into non-League on ‘frees’ – something Mason did in the summer of 1962 at the call of Chelmsford’s wealthy and ambitious chairman, John Coward.

The player in Chelmsford colours nearly 50 years ago.

Wolves had supposedly been demanding £22,000 for him after he made 19 League and cup appearances for them the previous season, so this was a major sum for the Molineux coffers to be missing out on.

The Chelmsford City Historian tells us that Albion, Cardiff and Watford had reportedly been interested as well, only to be put off by the asking price. So Mason dropped four divisions to the Southern League as part of an influx of talent also including Brighton’s Tony Nicholas (£15,000), Blackburn’s Roy Isherwood (£5,000) and Barnsley’s Ron Smillie (£2,000).

“City, embracing full-time professionalism for the first time, took advantage of the situation and, to much trumpeting, unveiled Bobby as one of a clutch of ‘name’ signings,” the article informs us. “In so doing, Chelmsford simply drove through the open door and, legitimately, if somewhat rogueishly, helped themselves to a cornucopia of star quality.”

The plan was to take the Southern League by storm in an era in which there was no automatic promotion to the big 92; the cream of non-League had to rely on votes to take them in, just as clubs at the bottom of the Fourth Division had to seek re-election by lobbying for the blessing of their rivals.

But Rogers adds: “As it turned out, the raiding rampage backfired spectacularly. The League soon voted to outlaw any clubs who had signed players in this fashion and disqualified them from making application for membership for five years.”

Chelmsford didn’t even have the consolation of winning the title. They fell well short and had the pain of watching the likes of Oxford, Hereford and Cambridge go up instead in subsequent years. 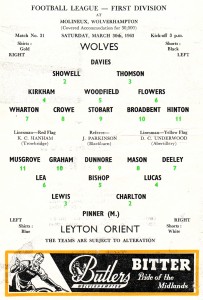 A friendly welcome home guaranteed for Orient's no 7 and no 8.

Gates did rise dramatically, though – ‘never was there greater expectation or excitement in the New Writtle air’ – and Mason scored six goals in his 32 games before joining Leyton Orient.

The player even made a competitive return to Molineux when he and Norman Deeley lined up for the East Londoners against Wolves early in 1963 during the only season of top-flight football they have ever had.

Chelmsford won the Southern League in 1967-68 and 1971-72 but have never made the big step up. They are now in the Conference South.