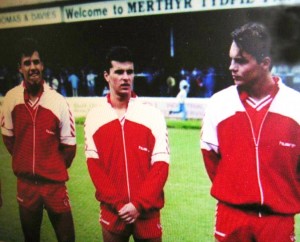 Brian Law has joined the chorus of tributes to Gary Speed and revealed how their happy days together in Wales’ age-group teams led to a surprise mid-1990s Molineux reunion.

The two were team-mates in the international under-17, under-18, under-21 and B sides, one hailing from the north of the country and one from the south.

And their subsequent career paths were every bit as contrasting as their geographical backgrounds.

Law, who was born in the valleys in Merthyr Tydfil, was the first of the two to make his senior debut – in a 4-2 defeat against Sweden in Stockholm on the night in April, 1990 that Steve Bull’s two goals helped England beat Czechoslovakia by the same score.

“I was the first to play from our group and remember the manager (Terry Yorath) asking me to go to Cardiff for my second cap and ‘Speeds’ to go along for the experience,” he said.

“Stupidly, I said ‘no’, thinking I was going to get 100 caps and didn’t need to cram in two games over a weekend. That sums up the difference between us. Gary was the model pro who did what the manager wanted, respecting his position and authority. I was the typical arrogant one who knew it all.

“I hadn’t spoken to him for years, so I cannot claim we were great mates but we got on very well when we were young and representing Wales at all levels.

“He kept nagging me to go to Leeds with him. He had already signed there and their scout was ever-present at our games, training etc. I always said I’d go but had lots of other interest and eventually cheesed them off by pulling out of a trip to them at the last minute and letting Speedy go alone.”

Law, a left-footed central defender who made 40 first-team appearances for Wolves in the mid-1990s, was a QPR player when he made his senior Welsh debut. He didn’t play for them again.

He was still in his early 20s when a foot injury forced his retirement – a blow he followed with a round-the-world backpacking trip on which he started to discover that the problem was curing itself.

Wolves, under the management of Graham Taylor, paid back his £34,000 insurance money, plus a £100,000 fee to QPR, to sign him late in 1994 and he stayed at Molineux for more than two and a half years before joining Millwall.

His wanderlust has now taken him to Western Australia but he added: “My dad Skyped me over the weekend because they knew Gary from the Wales youth games.

“I had forgotten but Gary was at our game against Sheffield Wednesday in the FA Cup at Wolves (in 1995). He came into the players’ bar, we had a chat and I introduced him to my parents. He called them Mr Law and Mrs Law and spent time talking about football. It left a mark with them – he was so polite;  a gentleman who was so genuine.

Law during his Wolves career.

“I think that’s in tune with the other comments I have read about him. He was a true professional, a credit to the game when footballers are sometimes misbehaving and getting a bad press.

“He was always laughing, smiling, upbeat – a great player to have around. EVERYONE in the Welsh squads liked him.

“Obviously, I followed his career and what a great player and professional he was! Now I’m stunned like everyone else. It’s just incomprehensible. With the recent TV appearance, the Welsh success, a great family, he seemed to have it all.”