Writer on Whose Every Word We Hung

He never pulled on the famous old gold shirt but this distinguished man left an indelible mark on the minds of many Wolves supporters. Among them was an impressionable young Charlie Bamforth, a regular contributor to this website from across the Atlantic.

I will never forget our first home game of the 1968-69 season. I arrived by train in Wolverhampton from Wigan North Western nice and early and, as was my wont, walked to Molineux to get my programme before making my customary trip to a café in town for faggots, chips and peas. Don’t tell me I don’t know great food when I see it. 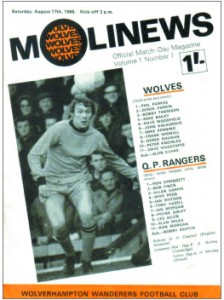 Not a bad shilling's worth.....the welcome sight that greeted fans at Molineux's first game of 1968-69.

What I had not anticipated was the wonderful surprise I had in opening the pages of Molinews.

Wolves’ programme had gone glossy. It had grown in dimensions. It was a magazine, for goodness sake!

In its various issues, we would read about Mike Bailey and Ernie Hunt partnering in a restaurant. We would see pictures of the players as family men. We would learn more about John Holsgrove and his admiration for Hank Marvin. And much more.

Geoff Allman (sadly departed and even more associated with Walsall than Wolves) would write about the exploits of the Central League side. There would be pen pictures of the FA Youth Cup team and, suddenly, some idea of the origins of the likes of Wayne Nicholls, Eddie Gould, Gerry Farrell, Rod Arnold and the aptly named Dave Molyneux. In short, the programme was a huge leap from where we had been in the past.

For sure, from 1965-66 to 1967-68, we had enjoyed reading the ‘free’ Football League Review stapled inside. Yet the specifically Wolves-derived material still added up to just eight pages, including the front and back covers, the former being a uniform title page and the latter embracing the scoreboard (A-X, giving us the code to the half-time scoreboard, with Wolves reserves inevitably at X in those happy days when the second team played on Saturday afternoons and usually on the ground of the club our first team were playing that day).

The back page also had the updated lists of Football League and Central League player appearances and goalscorers. On the penultimate page was my favourite part of all; the teams from the previous week’s games at all levels. I rejoiced in seeing how the names changed game to game and I seemed to know as much about the machinations of the Worcestershire Combination side as I did about the seniors. How sad is that? 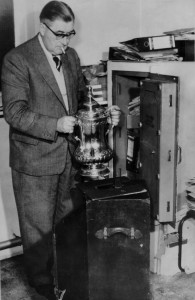 There was interesting reading in these old-fashioned programmes. On page three, we had Notes by Wanderer, with an update on matters in and around Molineux. We never did find out who wrote it but I rather suspect it was JT Howley, the legendary secretary and general manager.

But, on the two innermost pages, for the longest time (and right up almost to his death in Southport in 1968, aged 79), we read Today’s Topical Talk by a certain Ivan Sharpe.

Seemingly, all most of us knew about this chap was that he had a sharp pointy face and a predilection for bow ties. But he had been a remarkable servant of the game.

In 1907-08, he had signed as an amateur winger for Watford, recruited by their player-manager John Goodall, who, in turn, had been one of the ‘Proud’ Preston players that had secured the League and Cup double in 1888-89. In Sharpe, then, there was a link to the very origins of organised football, as we know it.

He never did sign anywhere as a professional. Instead, he made his living as a football correspondent, surely poacher-cum-gamekeeper if there ever was such a beast. He wrote for the long gone Athletic News and Sunday Chronicle, among others, along  the route he took to appearing regularly in the Wolves programme.

But Sharpe was hardly a mug on the field. Equally good with either peg, he played on both wings not only for Watford but also Glossop (signed by one of the Hill-Woods before they deserted the gritty North West for the marble halls of Highbury), Derby County (alongside Steve Bloomer and a certain Major Frank Buckley), Leeds City, Leeds United, Brighton and Nottingham Forest.

He also played for the England Amateur International team at a time when the unpaid game was almost as prestigious as the professional arena and, Gareth Bale please take strength, for the Great Britain team who won gold in the 1912 Olympics.

As a newspaper correspondent, he covered the first and very famous 1923 Wembley FA Cup final between Bolton and West Ham (white horse and all) and interviewed Benito Mussolini. He even had an interview lined up with Adolf Hitler but the Führer chickened out.

In 1947, Sharpe became the first chairman of the Football Writers Association, the organisation that subsequently instituted the Footballer of the Year award. Others involved in the founding included Charles Buchan and Roy Peskett, Stanley Matthews being chosen as the first recipient in 1948 and Billy Wright, in 1952, becoming the first Wolves man similarly honoured. 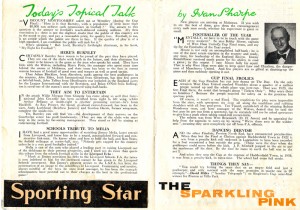 The thoughts of a writer of influence.

Sharpe had a knack for spotting the unusual. Amid the terrible Burnden Park tragedy of 1946, when 33 people died in the crush at a Bolton v Stoke game, he was able to find light relief and wrote: “During the stoppage in the match, a goods train was halted by signals on the invaded railway line. At once, a score of people clambered on to the coal-tender to get a view of the game. A minute later, the signal fell and the train moved off, carrying out of sight its load of football fanatics.”

During my growing up as a Wolves ‘nut’, I hung as much on the prosaic writings of Ivan Sharpe only a little less than I did on the heroism of Fred Davies, the poise of Ron Flowers, the grit of George Showell, the pace of Alan Hinton and the elegance of Peter Broadbent; not to mention Peter’s haircut!

I would never achieve my dream of wearing the old gold but I did go on to emulate Ivan by writing regularly for the Wolves programme. The similarities, I fear, end there.