Star Foursome Are Booked In 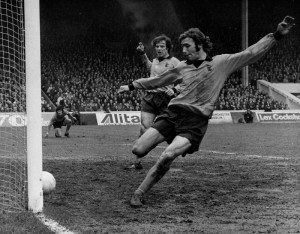 Anxious moments for the grounded Phil Parkes as John McAlle clears off the line. But where's 'Squeak'?

Three men whose combined appearance tally for Wolves exceeded 1,500 games are due on parade at Molineux tomorrow to sign copies of the fast-selling new book, Wolves In 20/20 Vision.

Derek Parkin, John McAlle and Phil Parkes – long-time team-mates in the 1960s and 1970s – will be back together in the main club shop from 6pm-7pm.

And there’s a bonus for younger supporters in the form of an appearance at their side by a star from the much more recent past, Matt Murray.

The quartet have kindly agreed to support the recently published 144-page book by lifelong supporter Jim Heath, who will also be present on the top table.

Parkin, a good friend of the author’s, played a club record 609 first-team Wolves matches while McAlle’s tally of 508 leaves him sixth in the Molineux all-time list. Parkes is 16th after making a mere 382 appearances!

Telford-based Heath reflects in print on how the keeper became a legend at Molineux after his dad decided Wolves offered better coaching than Albion.

He is also referred to as the first of the Molineux goalkeeping giants following the heroics of the smaller Bert Williams and Malcolm Finlayson. 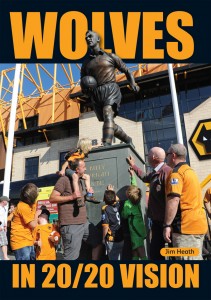 Now on sale for Christmas.....

Not surprisingly, Parkes and McAlle feature in the chapter headed Twenty Revered Home-Grown Lads while no-one could argue against Parkin’s inclusion in the Twenty Great Signings section.

There are kind words, too, for Murray, who is described as ‘one of the unluckiest players ever to wear a Wolves shirt.’ “How many mirrors did this giant break” Jim asks. “You can only dream of the heights he would have reached.”

Wolves In 20/20 Vision is on sale through all of Wolves’ usual retail outlets and costs £9.99. Further details are available from Thomas Publications (telephone 07734-440095 or email info@thomaspublications.co.uk).