Manager Speaks Of His ‘Hopeless Task’ 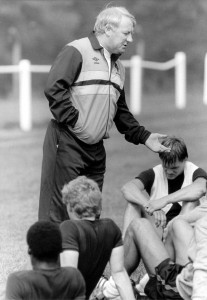 The Doc spreads the message at Castlecroft soon after his arrival.

﻿﻿We have already reported on this website how Tommy Docherty once made a secretive attempt over cocktails in the Caribbean to lure Ray Crawford from Wolves to Chelsea.

And on how football’s lack of sentiment saw to it that the manager eased his former Stamford Bridge coach Frank Upton and reserve keeper Jim Barron out of Molineux 20 years later in order to find backroom jobs for his son Michael and the rotund Greg Fellows.

Now we can reveal more about the manager’s traumatic year in the West Midlands – which sadly came at a time when he was very much past his sell-by date.

We have just had a long audience with The Doc on behalf of the successful Backpass magazine, for whom our efforts have led to two long articles – one for the recently published issue 20 and one for when number 21 hits the news stands later this winter.

But there was still material left over, including the 1984-85 stint he had with Wolves in the Second Division.

“I could hardly say ‘no’ when a club as famous as that came in for me,” Docherty said. “But it was a hopeless task really. There was no money.

“I wasn’t sure I’d be able to work with Derek Dougan but I accepted the challenge anyway. As for the Bhattis, I only met them twice – once when they hired me and once when they fired me.

“I still speak to Roger Hipkiss, though, and had a lot of time for Eric Woodward, who I think was the general manager.

“Getting rid of Frank Upton was the sort of thing I did throughout my career. I had this reputation as being controversial but I did what I had to do. After all, when I had first gone in at Chelsea, I moved on a few players like Peter and John Sillett, Reg Matthews and Derek Kevan, who I thought had been too cosy with the former manager, Ted Drake.”

Docherty will be most fondly remembered at Molineux for giving a shock debut on the season’s opening day to a 17-year-old from Kenilworth, goalkeeper Tim Flowers.

Things might have been different had he been able to cobble together the £40,000 needed in the autumn to make a permanent signing of prolific loan capture Jim Melrose.

But the phrase ‘unmitigated disaster’ that Docherty applied to the 4-0 home defeat by Fulham in late April could have been used to sum up the entire season. 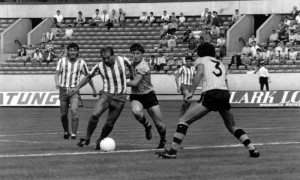 Debut day for Tim Flowers in Wolves' 2-2 draw with Sheffield United in 1984....the rows of empty seats tell the story of what was to become a familiar scene.

Wolves went 21 games without a victory between an odd-goal win at Craven Cottage at the end of November and a 1-0 success at Carlisle on April 8. No wonder they finished bottom, suffered a second successive relegation and ended up in the Third Division for the first time in over 60 years.

The manager, having wisecracked his way into office by saying that when he opened the Molineux trophy cabinet, two Japanese prisoners-of-war jumped out, inevitably departed in the summer.

But he went with a splash of style, cracking open a bottle of champage at a local tennis club for those in his circle.