When Wharton Took On Dougan 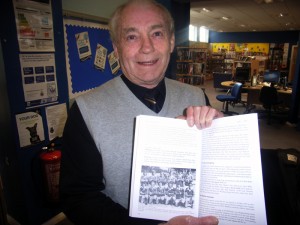 Terry Wharton highlights a Darlaston team picture with himself on.

Terry Wharton had a walk down Memory Lane today when he took part in a signing session for a book about another of his former clubs.

Considerably less well remembered than the fact the popular former winger played 242 games for Wolves is the spell he had in 1976-77 as player-manager of Darlaston Town, then of the West Midlands League’s top division.

And it was in the latter guise that he was present for two hours at Cannock Library this morning to autograph copies of a recent publication.

“I joined Darlaston as a player soon after I came back from South Africa in the mid-1970s,” he said.

“It’s not me being big-headed when I say I was too good for that level really. I had been playing at a decent standard in Durban after all.

“But I needed to work and Darlaston were good enough to give me a chance. I enjoyed my couple of years there because we were fairly successful.

“The post also enabled me to get a foot on the working ladder. The chairman Reg Cooper gave me a driving job and I got my HGV licence.”

Wharton’s time at the sloping City Ground included a dabble in management because he was appointed player-boss for 1976-77.

And his year in charge was highlighted by a good FA Cup run in which his side reached the final qualifying round and were drawn against Derek Dougan’s Kettering Town.

The Doog, who was the visitors’ player-manager, is shown as a bystander in a photo in The History of Darlaston Town Football Club as the underdogs equalised in the first game. He himself had opened the scoring in the 1-1 draw and did likewise as Kettering won the replay 2-0.

“I was good mates with Derek and went to one of the London Wolves get-togethers with him a few years ago,” added Wharton, who went on to watch Wolves’ game with Stoke this afternoon.

“We thought we should have put them out of the Cup at our place when the gate was just over 1,500. Apparently that still stands as the biggest the club have had since the 1940s. 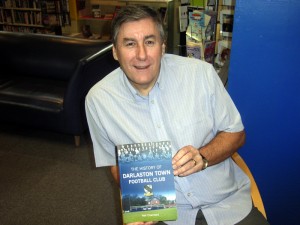 Author Neil Chambers with his book.

“Kettering had gone something like 18 games without defeat and just about survived with a draw. Then they beat us down there when I was out injured.”

Wharton isn’t the only Wolves right-winger with Darlaston connections. Norman Deeley also served the ‘Blues’ early in the 1970s.

By a further coincidence, Deeley’s finest hour – his two goals at Wembley in 1960 – came 12 months after Jack Burkitt had captained Nottingham Forest to victory over Luton in the 1959 FA Cup final. Burkitt, a third former Darlaston player, attended the same school as Deeley, Holyhead Road in Wednesbury.