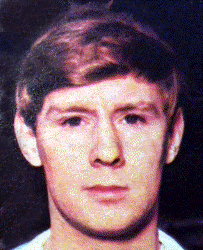 The young Waggy in his City days.

Dave Wagstaffe has dismissed suggestions that he goaded Bobby Moore into the only sending-off of the late England legend’s long career.

An article in the latest issue of the Backpass retro magazine describes how Wagstaffe – then a young winger at Manchester City – ‘aimed a sneaky kick’ at the back of the wing-half’s legs in a League game at Maine Road more than 50 years ago.

The piece was written by Hammers historian Tony McDonald and said Moore retaliated in similar fashion with what was ‘literally the last kick of the game.’

“As the two teams walked off at the final whistle,” the piece added, “Waggy escaped unpunished but Moore’s reaction was to cost him a week’s suspension.

“This being long before the introduction of red and yellow cards, Bobby’s team-mates didn’t know he had been sent off until he told them in the dressing room afterwards.”

Wagstaffe has different recollections of the encounter, though, and denies any wrong-doing.

“I know it’s a very long time ago but I don’t like the suggestion that I was sneaky in taking a kick at Bobby,” he said.

“I might have given him a hard time by getting a tackle in whenever I could and not giving him time on the ball. But that’s different to saying I kicked him when the referee’s back was turned. 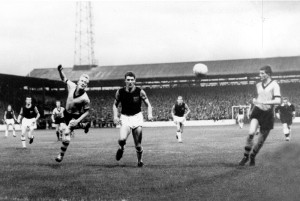 Bobby Moore (centre, in the semi-distance) in action against Wolves at Upton Park in August, 1962. The visitors, represented here by Chris Crowe (left) and Fred Goodwin, won 4-1.

“I like to think I always played to certain standards and didn’t get up to things like that. Players generally didn’t want to kick Bobby Moore. He was well admired and I never had a problem with him. This incident was never mentioned again when I faced him in matches against West Ham or Fulham.”

Wagstaffe played around 175 games for City, the one in question ending in a spectacular 5-3 First Division victory for West Ham.

By coincidence, the much-loved Molineux winger was the first player ever to be red-carded in an English League game. He had left Wolves and was playing for Blackburn when he was ordered off in a Second Division fixture at Orient in October, 1976.