Unheard Tales From A Season In Tinseltown 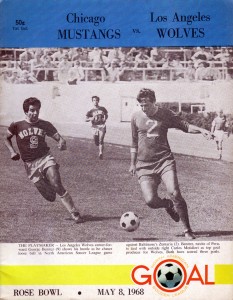 Evidence of an experiment continued.....

So what did happen to Los Angeles Wolves after Ronnie Allen and his squad of promotion winners had flown back to England in triumph in July, 1967?

If you assumed the name ceased to be from the moment the homeward-bound plane carrying the Molineux squad had left the tarmac, you would be wrong.

The ‘brand’ lived on for a year and a half as the Americans tried to get a professional game off the ground, the team playing a full season from spring to autumn rather than the condensed summer programme Wolves fulfilled to great effect under Allen.

And playing a starring role in the line-up was Wolves-supporting Malcom White, a goalkeeper brought up in Low Hill and Fordhouses, who had seen service with Walsall and a succession of other lower-division clubs before receiving the call to pack his bags for California.

“I had never been to America until I went out there to play in April, 1968,” he said. “The manager was Ray Wood, the Manchester United keeper who broke his jaw when he was charged by Peter McParland in the FA Cup final against Aston Villa in 1957.

“I had been playing at Halifax under Alan Ball Senior, who told me he could fix me up with a move to Los Angeles. I went to Leeds to meet Ray, who was a Munich Air Crash survivor, and agreed terms pretty quickly.

“It wasn’t a hard decision because the wages were three times higher than I was on. I was earning £70 a week in the USA and the top lads at Halifax were on £24.”

Goalkeepers had already played an inspiring role in the life of White, who turned 70 this year. He grew up with Bert Williams as his hero and, in his early teens, won a quiz competition which carried a day at a Wolves v Albion game as a prize.

“I sat in the press box with Charlie Buchan and had a photographer following me round as I met Billy Wright and the rest of the team,” he recalled. “I was even taken home in a car the organisers had laid on.

“Unfortunately, though, I never got close to playing for Wolves. I didn’t even have a trial. In fact I didn’t play football for two years after leaving school because I went to work as a bricklayer’s apprentice and was aware I needed my hands to be in good condition for my job.

“Then I played for Coseley Amateurs, whose manager arranged a trial for me with the youths at Walsall. We were four down after 20 minutes before winning 9-4. 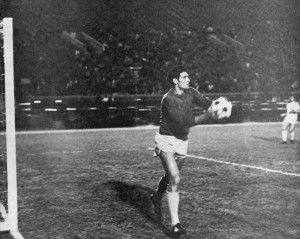 “A team-mate called Bill Stanton went for a trial at Grimsby and it was suggested I went along as well. We were given £5 each to cover train fare and two nights in a hotel because there wasn’t a good service on a Saturday.

“I was asked back and was eventually with Grimsby for five years, playing nearly 70 first-team games from 1958 to 1963. When we were in the Second Division, we were competing with the likes of Sunderland, Newcastle, Chelsea, Leeds and Middlesbrough. Against Sunderland, I saved a penalty from Brian Clough in front of 46,000 – mind you, he scored a hat-trick in the same game!

“Then Bill Moore paid £6,000 to take me to Walsall. I had one season there before being taken to Lincoln in a swap deal for Terry Carling and playing 25 matches there.

“Graham Taylor was on the Lincoln staff as well. He was younger than me and I don’t think he played in the first team at the same time, although I remember him as a sturdy full-back. His Dad was the reporter on the paper in Scunthorpe. I smashed my leg up in an accident a few years ago and Graham was kind enough to send me a letter when he heard about it.

“I left Lincoln after a year and joined Bradford for three months on a free, then went on to Halifax, where the manager was Willie Watson. He had played football and cricket for England but was soon replaced by Vic Metcalfe. Then Bally went in.”

Wolves’ name was still revered in ‘soccer’ circles in America and, amid grandiose ambitions, the Los Angeles franchise owner Jack Kent Cooke was happy to bank-roll the team’s travels across the continent.

“Clive Ford, who had been at Wolves as a youngster, went out for about the last six weeks of the season and earned the nickname The Milky Bar Kid,” White added. “We all had lovely tans by then and he arrived all pale!

“I was particularly friendly with Mickey Walker, who is now at Doncaster as director of football. I knew him from Bradford City. We had neighbouring flats but it wasn’t so good for our wives.

“I went out there a month before Val to furnish the apartment we were allocated and to buy the smallest car I could find – a little black and white one. She didn’t drive and we could be away for ten days at a time. But it was a fascinating place and the sun always seemed to shine.

“We trained at The Forum, a Roman-like structure where the LA Kings ice hockey team and LA Lakers also played. We used to do coaching as well and played against some of the university teams. 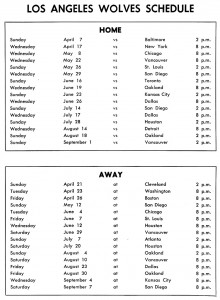 (Please try clicking on image to enlarge it).

“We also had two Brazilians, an Argentinian and had to have at least one American player in our squad. There weren’t many big English players in the league, although George Kirby was at New York, Bobby Cram and Johnny Green at Vancouver (where they played under Bobby Robson and then Ferenc Puskas) and Phil Woosnam and Freddie Goodwin were managing over there.”

In the inaugural North American Soccer League of 1968, LA Wolves played in the Pacific Division, facing West Coast sides like San Diego Toros, Oakland Clippers and Vancouver Royals four times each, those in the Lakes and Gulf Divisions such as Chicago Mustangs and Dallas Tornado two or three times and having only one match against sides from the East – New York Generals and Boston Beacons, for example.

The side surprisingly lacked any former Wolves players but there were reminders of the happy union between Molineux and the city known as Tinseltown. They played in all gold, albeit with numbers on the front in purple!

Progress on the pitch was initially encouraging and White was the talk of the league as he kept four successive clean sheets – ‘lock-outs,’ ‘shut-outs’ or even ‘blankeroos’ as the local reporters called them. But the side fell away to finish third out of four in the Pacific Division and miss a place in the play-offs.

White ruptured his thigh muscle away to the eventual champions Atlanta and, although Wood was registered as a player, he signed Joe Dean from Carlisle as a replacement. The Fordhouses boy got back in near the end of the season and played about 20 of the 32 games in all.

“We played at some well-known venues like Fenway Park in Boston, Wrigley Field in Chicago and our home ground, the Pasadena Rosebowl,” he added. “We didn’t play in the Colisseum, where Ronnie Allen’s Wolves did so well.

“We typically had crowds of about 3,000 – mainly made up of Mexicans and Europeans, who were living there. The stadium held 100,000, so it certainly wasn’t like the grounds we were used to in England. 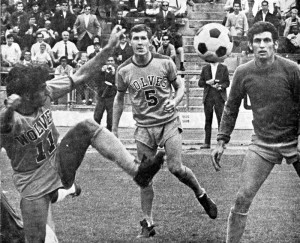 White (right) in action in the Pasadena Rosebowl.

“It was arranged that we played, for example, Boston, Atlanta and St Louis a few days apart, to cut down on the travelling costs. But the team must still have cost a fortune to run.

“It’s fascinating to debate why the game didn’t take off there but look at their four big sports – baseball, basketball, gridiron and ice hockey – and you realise the idea of using their feet is foreign to them. Put a ball on the ground and an American’s first reaction will be to pick it up.

“LA Wolves stopped after one season. Jack Kent Cooke was a billionaire and a nice man but he decided it wasn’t worth carrying on with and just said that was that.

“While we were there, the Vietnam War was on and we were encouraged to return home at the end of the season just in case. If we had stayed through the winter, there was a chance we might have been seen as residents and been called up.”

White had decided he didn’t want to ‘get kicked from pillar to post playing amateur football’ and already possessed the skills that have made him a big success in the building trade for several decades.

But his career was substantially prolonged by Jim Smith, with whom he had played for three seasons at Halifax. Smith needed a goalkeeper and took White to non-League Boston United for a trial. He stayed at York Street for five years. 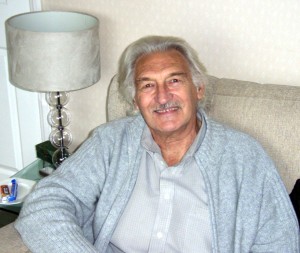 “They were my best years really,” he said. “I think I had the ability to play higher but I was an introvert, always wondering what might go wrong.”

The LA story doesn’t quite end there and White’s own tale is set to turn full circle. He and Wednesfield-born wife Val have lived in Lincoln for 40-odd years but are now planning to move back close to their roots. Some foundations are built to last.

* The opening game of LA Wolves’ 1968 season, against Baltimore Bays, was postponed because of national mourning following the assassination of Martin Luther King Jnr.