Where A Prawn Sandwich Doesn’t Quite Measure Up…. 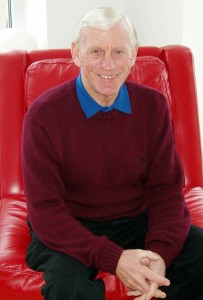 David Thompson.....recalling a day with The Reds.

Yesterday’s dramatic events featuring Manchester United and Blackburn brought back happy memories for David Thompson – and not just because it was against the latter that the 1960s winger scored his only Wolves goal.

He attended the same fixture two seasons ago as a VIP guest at Old Trafford after fixing up a treat for one of his grandchildren.

“One of our daughters had a friend who arranged a trip for us to have a look round the training ground at Carrington and then go on to the game,” Thompson recalls.

“The guy who made it all happen was one of the goalkeeper coaches at United, Richard Hartis. I don’t think he had a professional career as a player but he has obviously made his mark since because he has gone as part of Ole Gunnar Solksjaer’s backroom team at Molde in Norway.

“The training facilities were fantastic compared with the ones I knew as a player and we were delighted to find we also had tickets for the players’ lounge later.

“We were a bit reluctant to bother the players at first but were told they would be happy to sign autographs and pose for photos – and they were. They were very patient.

“Our grandson, who was 13 at the time, now has a signed and framed United shirt in his bedroom as well as the memory of seeing United win 2-0. But when I asked him later what he thought the best part of the day was, he said: ‘The hot dogs before the game’!”

None of Thompson’s ten first-team matches for Wolves were against United but his second appearance saw him face Blackburn in the autumn of 1964 in what was the final away game of the Stan Cullis era.

It wasn’t a happy occasion, with the home side taking further belated revenge for the 3-0 defeat they had suffered against the same opponents in the 1960 FA Cup final.

“They thrashed us 4-1,” added Thompson, who is now 66 and still living a few miles north-east of Leeds. “Bryan Douglas gave Ron Flowers a right run-around that day and the only good thing for me was that I scored our goal.”

The Yorkshire-born outside-right kept his place two nights later for the 4-3 home victory over West Ham which proved to be Cullis’s swansong and also lined up against Blackburn several months later in the return, which was won 4-2 by a side by now under the control of Andy Beattie. 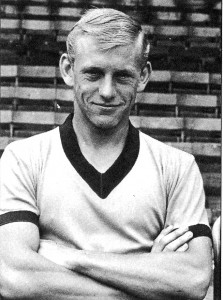 Thompson pictured while a Molineux youngster.

The story we did two Januarys ago tells where the rest of David’s career took him but life has changed since then with retirement from his post-playing work.

“The only jobs I’ve got now are unpaid ones – for our three daughters,” he said. “One of them lives in London, so we still do some travelling.

“And I stay in touch with the Stobarts, who I was very friendly with when I was at Molineux. I ring Maureen regularly and am very sad to hear that Barry isn’t well.”