A Slice Of History Never To Be Matched 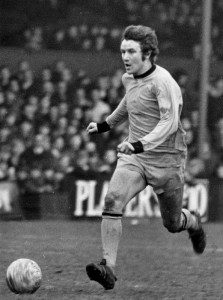 Les Wilson advances during Wolves' game at Stoke in March, 1969.

Stephen Ward enjoyed further success as a Premier League utility man of some renown when he struck his fourth goal of the season in the Molineux clash with Chelsea two days ago.

But the man who has scored three times for Wolves in 2011-12, as well as once for the Republic of Ireland, still has a lot to do to match the adaptability of the club’s ultimate Mr Versatile.

Although Ward has played at left-back, left wing, in central midfield, up front, in the hole and even, at Everton in November, as an emergency right-back, he has to doff his cap to a predecessor from bygone decades.

In the days when players in club games sported only shirts numbered from one to 12, Les Wilson wore ten different jerseys in a Molineux stay that brought him 116 first-team appearances.

“My brother Garry, like me, is a Wolves and Manchester United fanatic and has maintained over the years that nobody could have played in as many different positions at Molineux as I did,” Wilson said.

“I have the club’s Complete Record book here at my side in Vancouver and it appears to bear out that no-one there has filled such varied roles.

“As a player developed in Canada, it gives me a wonderful feeling of accomplishment and pride that I played in every position except goalkeeper for a world-famous club in one of the best leagues in the world.

“I know I have been fortunate enough to receive recognition from the Canadian Soccer Hall Of Fame and other football institutions but the achievement of being able to serve Wolves as I did is the proudest in my career by a long shot.

“I’m so pleased to have been able to set a sort of benchmark for all North American players to be measured by, especially Canadian players.  I played a long while before the likes of John Harkes, Frank Yallop, Tomasz Radzinski, Alexi Lalas, Landon Donovan, Brian McBride and Clint Dempsey, in many cases before they were born.

“It’s an incredible feat for any player in top-class football to play in every outfield position. But, being developed in Canada, I look back on it as something very special because it’s probably unique.

“I remember Phil Morgan praising my versatility when he wrote about me in the Express & Star in 1971 and calling me a valuable asset. It meant such a lot.”

Wilson became the first North American-developed footballer to play 100 top-flight games in England, also emerging as the first man groomed in the continent to score in our First Division.

That honour fell to him at Everton in September, 1967, when he also became the first Wolves player to go on as a substitute and score. 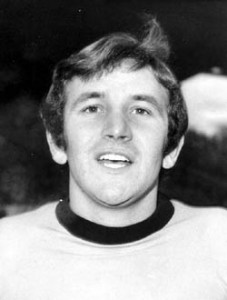 Always ready to play where asked - and with a smile.

Neil Emblen, Martin Patching, Colin Brazier, Alan Sunderland, Ken Knighton and Tom Bennett have also been referred to by this website as prominent utility men at Molineux but none could remotely claim to have been as flexible as Wilson.

He lined up at no 2 in a game at Liverpool in November, 1967, at no 11 at Newcastle in February of the same season and, improbably, at no 9 in the League game at Leeds in December, 1969 – an occasion he marked by scoring Wolves’ goal in a 3-1 defeat.
“I even played at centre-back in the summer of 1967 when we faced Dundee United in Dallas in a temperature of over 100 degrees,” he added.
“David Woodfield was injured and Graham Hawkins had returned to England for his wedding, so I partnered John Holsgrove. We drew 2-2 and so became United Soccer Association League Western Division champions.”
All of which is interesting food for thought for Stephen Ward as he continues to fill his personalised no 11 jersey with distinction……