Arch Rivals United In A Compelling Cause 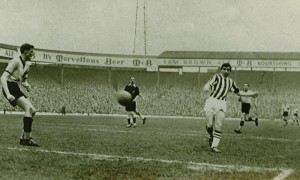 The Hawthorns - setting for this November, 1958, Black Country derby clash as Jimmy Campbell shoots for goal. Forces will be joined next month with a walk from there to Molineux.

Former Wolves players are being urged to join their Albion counterparts next month by supporting a pre-derby walk in aid of the Acorns Children’s Hospice.

Groups of supporters from the two clubs are crossing the Black Country on foot before the big Molineux return on February 12.

And organisers hope there will also be a sprinkling of players on parade in the countdown to the lunchtime kick-off.

“The idea is to get Wolves and Albion supporters pulling together in support of one of the West Midlands’ most important charities,” said Kieren Caldwell, whose daughter Emma was diagnosed with an inoperable brain tumour at the age of 13 months.

“Participants can either walk from The Hawthorns to Molineux or walk from Molineux half-way to Albion and then walk back with ‘the other lot’!

“It is 10.5 miles in total, so even walking at 3.5 miles an hour, people should be able to start at 9am and get in for kick-off. The response from both sets of fans has been fantastic but it would be amazing to get some players along, even if it’s just to start walkers off and give them some encouragement.

“The police and councils have agreed to the event and we have 28 walkers and £1,000 promised so far. But we are only ten days into the idea, so we would like things to grow quite a bit.” 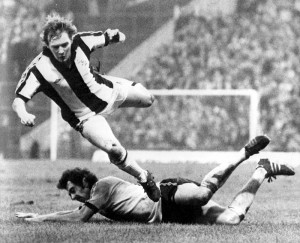 More information is available from the walk’s Facebook page http://www.facebook.com/events/318434308197578 or by clicking on to http://www.justgiving.com/teams/MarchToMolineux

Wolves Heroes will also be delighted to act as go-betweens for readers who are keen to be involved, either through walking or sponsoring. Please email us with offers of help and we will do the rest.

A brief read of the Caldwell family story underlines what a good cause this is.

“Emma has so far survived seven hours of brain surgery and 18 months of chemotherapy, with countless hospital admissions,” Kieren added.
“Acorns doesn’t just look after kids at the end of their lives, which is itself amazing, but also offers respite care for parents who just need a few hours to live a normal life. By ‘normal’, I mean cleaning and cooking and monotonous stuff like that. Nothing exciting.
“To be honest, if it wasn’t for Acorns, I would not have had the energy to look after my daughter for the past two years or so. I’d be unemployed and more exhausted than I am! Having a kid with a life-threatening disease kicks the hell out of you. But, for now, Emma is off treatment, so I’m doing what I can to thank the people that have helped us through two years of unbelievably difficult times.”