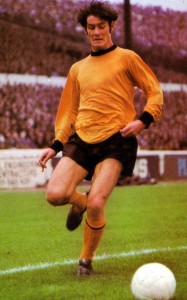 Jim McCalliog in action for Wolves away to one of his previous clubs, Chelsea.

Jim McCalliog has opened up on the huge crossover between his and Tommy Docherty’s careers after signing up to a new Scottish-based memorabilia business.

The long-serving Wolves midfielder twice joined clubs managed by The Doc as well as helping beat his sides in an FA Cup final and a semi-final.

But the links between the two Glaswegians run even deeper than that and they could have worked together long before they actually did.

“I remember walking home to where we lived in the Gorbals after playing in a schoolboy international between Scotland and England at Ibrox and being told by my mum that there was someone in the house to see me,” McCalliog recalled.

“I’d had my tea, then gone outside to kick a ball about. When I came in, I recognised Tommy. He was Chelsea manager then and wanted to take me there.

“I’d had 22 clubs after me altogether, including Celtic, but had already promised Leeds that I would sign for them, which I did. I went there just after Peter Lorimer, who was from Broughty Ferry near Dundee, Frank Munro’s home town.

“When things didn’t work out for me at Leeds, though, I returned to Glasgow, asked a couple of reporters to mention in the paper that I was looking for a club and one of them must have led me to The Doc at Chelsea.”

As it transpired, McCalliog made a bigger impact at Hillsborough than he did at Stamford Bridge, even scoring one of the goals as Sheffield Wednesday beat Chelsea in the 1966 FA Cup semi-final and hitting another in the Owls’ final defeat, from two goals up, against Everton.

And it was while he was in Yorkshire that he learned from a familiar source that he had been selected to play for Scotland for the first time.

“The manager Alan Brown told me I was in the squad and made sure I was in the dressing room so he could announce it in front of the other lads and have them shake my hand and say ‘well done,'” he added. 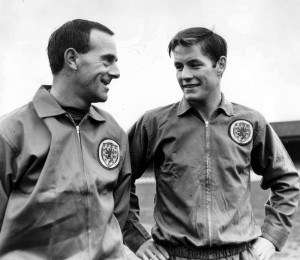 Jimmy Mac with keeper Bobby Simpson during a link-up with the Scottish squad in April, 1967.

“Little did Alan know, though, that Tommy had been on the phone the previous night and told me I was picked. I don’t know how he knew but I pretended to Alan that I knew nothing. It was well before The Doc was national manager but he was always very interested in my career and wanted to tell me the good news.”

The player became Britain’s costliest teenage footballer in the mid-1960s and had previously played for Chelsea in an FA Cup semi-final defeat. Then he had similar near misses after being brought to Wolves by Bill McGarry in 1969.

His first goal in gold and black was in a 3-2 win against Wednesday at Hillsborough but he was to be frustrated when trying to take the final step to glory. Not only did he appear in the run to the 1972 UEFA Cup final but also played several games in the excellent cup runs of 1972-73, only to then miss out on playing in the semi-finals of both.

And when it came to the parting of the ways just after he had been on the sidelines for the 1974 League Cup final, guess who was on the other end of the phone?

“I had fallen out with McGarry and was not really part of things when I travelled with the Wolves squad to Wembley in 1974,” McCalliog says. “I didn’t think he was treating me very well considering I had played over 200 games for him and was his captain when Mike Bailey was injured for the latter stages of the UEFA Cup run and the final itself.

“I needed to get away, although I loved Wolves, and went over to have talks with Vic Crowe and Doug Ellis at Aston Villa. The only problem was that I didn’t really want to drop into the Second Division.

“Around transfer deadline day in the March of 1974, I just happened to ask Bill if anyone else had been on for me and he said: ‘Yes, Tommy Docherty at Manchester United.’ The secretary Phil Shaw put me through on the phone to him and I couldn’t get in my car fast enough.

“Bill was annoyed and told me that, if I went to United, I wouldn’t get the bonus I was due in the August of that year, although he was happy for me to have it if I joined Villa. Maybe he was hoping to get a player in exchange from Villa.

“So it cost me money to go to Old Trafford and we got relegated that spring anyway. But you can’t turn down that sort of opportunity.

“On the day, I had been in the dressing room at Molineux in my training kit and was saying a few cheerios to the lads. They assumed I was going to Villa and saying things like: ‘You’re not far away, so we’ll be able to stay in touch.’

“But I was teasing big Frank, who got changed next to me, by saying they would have to look in that night’s paper to see where I ended up.

“The record books show that my last Wolves game was actually a 0-0 draw at Old Trafford, which I don’t remember, but I enjoyed linking up with The Doc again at United – more than he enjoyed it when I made Bobby Stokes’s winning goal for Southampton in the 1976 FA Cup final anyway!

“I always seemed to do well against my old clubs. I even went back to Molineux with Southampton and scored one of the goals when we won six in a night match in the Second Division.” 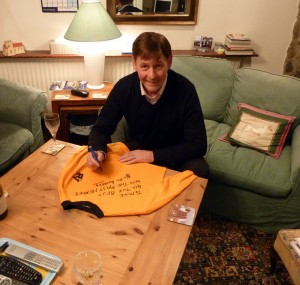 ....and signing up for Past Heroes boss Mike Godfrey.

McCalliog and his wife Debbie now run the Langside Guest House in Kilmarnock but he was happy to support another enterprise – the memorabilia business Past Heroes – when proprietor Mike Godfrey called on him earlier this winter with various items to sign.

For more information about the business, please click on www.pastheroes.com