Would You Believe It! 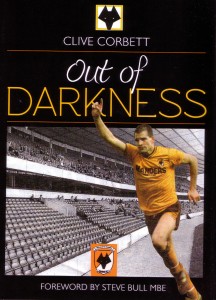 The cover to look out for.

A recently published book on Wolves has revealed that Molineux was haunted by returning former players long before Robbie Keane was even out of nappies.

While the Irishman’s two goals last weekend provided one of several big talking points of the derby against Aston Villa, author Clive Corbett has emphatically proved in his latest publication, Out Of Darkness, that the concept of old favourites coming back to hurt the gold and black cause is nothing new.

Interestingly, though, his eye for detail and his insistence on leaving no stone unturned means he also demonstrates another trend; namely, how often, in 1980-81, goals scored against Wolves came from the boot or head of players the club would sign in later years.

At £19.99, this is no cheap buy; nor is it a quick read. The 484 pages see to that. But it is a brilliant in-depth record of 13 years of Molineux history, picking up in 1977 where he left off with his sell-out first book, Those Were The Days.

I am several weeks into this latest hard-back and am not yet half-way. But there’s no mistaking the painstaking research of a Wolves fanatic whose day job is as a headmaster of a Worcestershire secondary school.

So many snippets that had disappeared from the memory bank – a rebel tour to South Africa involving John Barnwell and a proposed Wolves trip to Argentina, for example – are there.

Through his trawl of old Express & Stars and match-day programmes, plus a lengthy list of new interviews with players from the period, he has uncovered much we had either forgotten or didn’t know.

And nothing surprised me more than the impact of all those Wolves old boys or future signings at a time when Keane was a baby and Barnwell’s team returned to Europe as League Cup winners and also reached the semi-final of the FA Cup.

We all know that the club missed out big time on the barnstorming talents of Peter Withe, whose brief goal-scoring impression at Molineux in the mid-1970s was not enough to prevent his quick sale to Birmingham.

As 1980-81 was the year Aston Villa won the League Championship, it’s no shock that Withe (like Keane seven days ago) should strike the decider in the late-winter return clash of the clubs that season.

A few months earlier, Peter Eastoe netted against Wolves at Goodison Park on the same day that a Billy Wright (a pale imitation of the real thing, of course) also appeared on the Everton score-sheet. But there’s more. 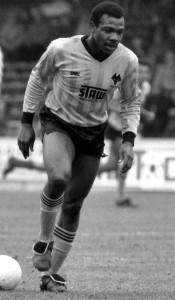 Floyd Streete, as Wolves fans would rather remember him!

None other than Glenn Hoddle scored from a brilliant free-kick for Spurs in the first instalment of the Cup semi at Hillsborough, as he did in one of the League clashes, and Cyrille Regis was on target for Albion in an early-season Black Country derby draw at The Hawthorns.

But try these for unlikely scorers against Wolves: Terry Connor (for Leeds), Bobby McDonald (Coventry), Jim Melrose (Leicester) and, most improbably of all, Floyd Streete for Cambridge in the tie that released Wolves’ grip on the League Cup.

I can pay Corbett no greater compliment than to say his first book has always been close at hand for reference on all matters concerning the 1960s and 1970s. Now, his even weightier new tome will be alongside it.

* Please contact us by email if you need further details about Out Of Darkness.