A Royal Occasion, Fifty Years On 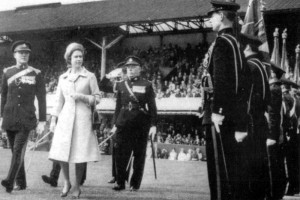 Soldiers on parade under a watchful eye.

Wolves can consider themselves fortunate to have had not one, but two visits from The Queen during her reign.

When she dropped in on Molineux for the first time, it had been nearly 100 years since a reigning monarch had set foot in the borough of Wolverhampton.

And, towards the end of an early-February week in which her time on the throne has stretched to 60 years, we reflect on the fact it is half a century this spring since her first trip to the stadium.

Wolves had not long finished an unhappy 1961-62 season in 18th place, only four points above the relegation line, when she included the town in a 48-hour tour of the West Midlands on May 24 and 25.

We at Wolves Heroes have just been given access to a 30-minute VHS tape of her visit, which started when she stepped off the royal train to be greeted by the Lord Lieutenant of Staffordshire Mr H Wallace-Copland and the Mayor Alderman H P Birch at 10.20am on Low Level Station’s number one platform.

She was driven through thousands of well-wishers along the town’s streets to Molineux, where she was greeted by a 30,000 turn-out despite the fact only the North Bank, South Bank and Waterloo Road Stand were opened.

The sizeable attendance can be best judged by the fact Wolves’ last home game of the season, against Chelsea a few weeks earlier, had attracted only 14,597.

After the playing of the National Anthem and before a rendition of Auld Lang Syne, she inspected a parade of the North and South Staffordshire Regiments, whose soldiers formed two lines – one stretching the full width of the pitch in front of the North Bank and the other extending right down the ground in front of the Molineux Street Stand.

The Queen, dressed in a coffee coloured coat and skirt, watched some of the proceedings from the royal dais, to which a red carpet led from the main stand. 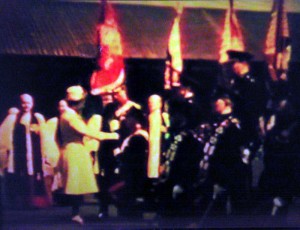 On her arrival at Molineux, she was met by Wolves chairman James Baker and reminded him that she had watched the club play in the 1960 FA Cup final.

After the pageantry at the stadium, she had lunch with the town big-wigs before going on to Wolverhampton Grammar School, Wednesfield and Walsall. The following day, she was at Coventry Cathedral.

The last reigning monarch to visit Wolverhampton before her was her great great grandmother, Queen Victoria, in November, 1866, who was present to unveil the bronze statue of the Prince Consort (the man on a horse) in what is now known as Queen Square. Mrs Stanley Cooper, 92 in 1962, was there for both occasions.

The Queen was back at Molineux in 1994 to officially open the redeveloped stadium.