An All-Embracing Cause Well Worth Supporting 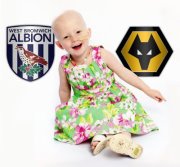 A football region united in a fabulous cause.

Ian Marrey and Kieren Caldwell will today walk side by side across the Black Country as a reminder that some things are more important than football; much more important.

Ian is a Stourbridge-based Wolves fan, whose son Jude was born with infantile spasms – a condition which means he is still not walking or talking at the age of four and does not use his hands.

In the blue and white sector, in Stirchley south of Birmingham to be precise, Kieren’s little daughter Emma was diagnosed at 13 months with an inoperable brain tumour. She has undergone seven hours of brain surgery and a year and a half of chemotherapy.

The two youngsters are cared for by Acorns Children’s Hospice and will be full of pride when their dads walk out to Molineux’s centre spot with the match ball shortly before the 1.30pm kick-off.

The cherished item is being carried among the group of around 60 fans and former players from the two clubs who are on a fund-raising mission with a difference as they cover the 10.5-mile route from The Hawthorns to Molineux on foot.

We at Wolves Heroes will be up early to participate in the walk, which sets off from Albion’s Astle Gates at 9am, and ask fans to dig deep for Acorns by backing this wonderful cause.

We are thrilled to have secured pledges of around £950 so far and are determined to get past the magical £1,000 mark before kick-off, so please try to do your bit.

The best avenues, as these will boost the Acorns coffers even further through gift aid, are to log on to www.justgiving.com/DavidInstone or www.justgiving.com/WalkForAcorns – retrospective donations will also be accepted, so please just email this website if that’s easier, preferably with a phone number also, and we’ll get back to you.

Cyrille Regis MBE and Brendon Batson MBE are setting us on or way and we are being joined en route by the likes of Mel Eves and the former Baggies duo of Derek Monaghan and Ian Hamilton. 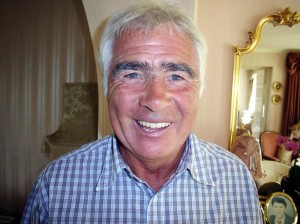 Bobby Gould - game for a laugh, as ever, and for the Acorns challenge.

We are also expecting to see Bobby Gould – as a blur at least. The extrovert 65-year-old is driving up from his home 20 minutes south of Bristol to take part, on condition he can run the course, rather than walk it.

To make sure he is fully entered into the spirit of an enterprise that encompasses two of his favourite former clubs, he will be wearing an Albion top for the first five and a bit miles and a Wolves shirt for the remainder. What a great effort and so typically Gouldy!