A Wish Too Far 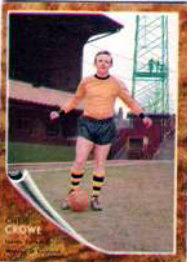 A cigarette card of Chris Crowe.

Chris Crowe included a fruitful spell at Wolves in a six-club career that also earned him England recognition at various levels up to and including the seniors.

Alas, his unfulfilled dream of playing for Newcastle – the city of his birth – was a regret he took to the grave nine years ago.

Although the blond forward left Tyneside before he could walk, the ‘pull’ back there was obviously considerable as he hopped, with no little success, from Leeds to Blackburn, Molineux, Nottingham Forest, Bristol City and finally Walsall.

With Wolves, from February 1962 to August 1964, he scored 24 goals in 85 games. But maybe there was frustration that he couldn’t impress for them in games against Newcastle. At the time, the two clubs were in the early stages of a six-year separation because of their respective stints in the Second Division.

So well travelled was Crowe, who later had a spell with Sydney-based Auburn, that it might have been difficult to identify what he saw as he roots.

We are therefore happy to fill in some of the gaps and can confirm he spoke with a Scottish accent, courtesy of parents who came  from north of the border.

And it was to Edinburgh that the family moved while he was still a tot. He described himself as fitba’ daft and grew up playing on the city’s cobbled streets, going on to train for nine months with Hearts.

He won a Scottish schoolboy cap at Wembley against an England side containing Barry Stobart. Crowe played as a winger because he was considered too small in his preferred position of inside-forward.

But, in the same 1964 article in which he revealed his hankerings for St James’ Park, he added: “There was no groundstaff system in Scotland as there was in England. There were too many players around and too few games to be had. I couldn’t see much future for the budding Chris Crowe up there.”

Thus he headed south to Leeds, by now playing in a more central role. “It was quite something to have Raich Carter – one of England’s greatest inside-forwards – advising me how to do the job he once did. And it was certainly something, at 17, to play at inside-forward alongside big John Charles.

“My biggest thrill, though, was winning my first England cap. That was the big thing. I got the news that I was to play against France by listening to the radio.” 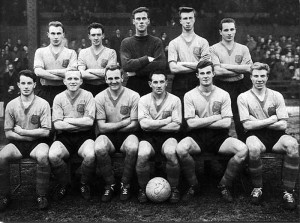 Crowe at Leeds, one in from the left on the front row and next to Don Revie.

That honour came against France in the European Nations Cup at Hillsborough eight months into his Wolves career and was to prove his only cap, although club colleague and fellow debutant Alan Hinton was to play a further twice.

Crowe made more than 100 appearances for Leeds and had 51 League games for Blackburn, 73 for Nottingham Forest and 67 for Bristol City. In between going to Australia and coming out of retirement to serve Bath, he squeezed in a stay at Walsall that brought him 13 appearances.

The no 4 shirt was the one Saddlers fans saw most of him in but he also wore no 9 on one occasion and was in his trusty inside-right jersey when he scored his last goal in League football – in a 3-2 win at Reading in October, 1969.