A Chin-Wag With Waggy

Winger Steps Into The Breach 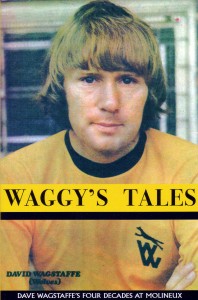 Now for the spoken equivalent.....

John Richards is only up to no 9 in his Player Q & A feature but has already decided it’s high time he sent for one of Wolves’ most famous no 11s.

As an author and skilled raconteur, Waggy is excellent value in any reminiscing session and will be targeted by Wolves Heroes’ co-owner later this month.

Richards plans to arm himself as usual with questions from our readers and Molineux Mix members, so please get you thinking caps on and let us know which particular subjects you would like to be covered in their conversation.

“I obviously still see plenty of Waggy with us both living in the area and it’s always great fun to meet up with him and chat about Wolves teams of the past,” Richards said.

“Although I played a lot of matches alongside him – and have to thank him for setting up many of my goals – he joined the club quite a few years before me and has clear memories of his time in the immediate post-Cullis era. 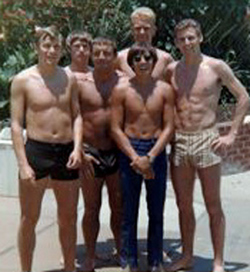 Hey-hey, we're the Wanderers! In the wake of Davy Jones' sad passing, we show the Monkees star (in the long trousers) with (from left) Les Wilson, Waggy, Ernie Hunt, Graham Hawkins and Bobby Thomson during Wolves' 1967 stay in Los Angeles.

“What sometimes gets overlooked around here is how many games he also played for Manchester City. He had a long career there as well before moving to the West Midlands over Christmas, 1964.”

Wagstaffe was yesterday contacted both via email and phone by his former team-mate Les Wilson as they came to terms with news of the sad passing of their mutual friend Davy Jones, of The Monkees fame.

Waggy gave his usual enlightening performance when interviewed by Paul Franks on Radio WM last night on the subject of his old boyhood pal.