England Trip With A Molineux Flavour 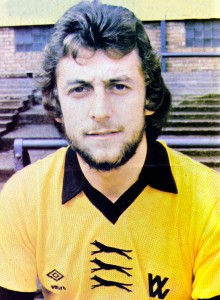 Peter Daniel - an unfortunate non-starter with England just after his Molineux arrival.

England’s B team tour under Bobby Robson at the end of 1977-78 wasn’t only one of the longest and furthest-reaching of football trips undertaken from these shores. It was also one containing a heavy Wolves presence.

But the inclusion of John Richards, Steve Daley and Mel Eves for an arduous series of games and flights around the Far East and New Zealand was only part of it. Two other members of the Molineux squad declined invitations while a Wolves-player-to-be took another of the places on an adventure for which Robson had ex-Wanderers player-coach Brian Owen working at his side.

To deal with the withdrawals first – England under-21 and under-23 international Peter Daniel had been signed by Sammy Chung from Hull only a couple of weeks before departure in May, 1978, and promptly revealed that he had been selected as a replacement for injured Aston Villa full-back John Gidman, only to himself pull out following medical advice to rest an ankle problem.

And Martin Patching, having just had his best Wolves season, with 37 appearances and seven goals, reluctantly said no because of holiday commitments.

Richards and Daley were original members, though, of a squad who also contained Viv Anderson, Paul Mariner, Gary Owen and John Hollins and who touched down first in Kuala Lumpur.

The Molineux duo both won their first B caps in a 1-1 draw with Malaysia in front of a 45,000 crowd at the Merdeka Stadium on May 30, this opening leg of the tour being one that Richards also remembered for off-field reasons.

“I recall there being a trip to a Guinness brewery which the lads obviously enjoyed,” he said. “In fact, two of them – not Wolves players, I hasten to add – enjoyed it so much that they went AWOL for a while afterwards.

“We had a reception at the British Embassy and they turned up late for the formalities by a swimming pool. Bobby Robson was not too pleased.” 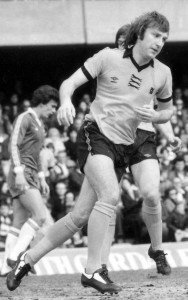 Steve Daley - happy on tour, but not at Wolves.

Daley scored one of the goals in a 6-0 friendly victory over Otago in Dunedin after the players had moved on to New Zealand – a country Richards had missed out on visiting with Wolves in 1972 because he was on an England under-23 tour of Eastern Europe.

It is a chronic lament among the gold and black fraternity that the striker won only one senior international cap – that under Alf Ramsey in 1973 some nine years before Robson was named as national manager in succession to Ron Greenwood.

Daley describes the seven-match England trip as being ‘one of the highlights of my career,’ although he seems to have spent at least part of it submitting transfer requests that didn’t lead anywhere. He remained at Molineux for a further 15 months.

In another warm-up game, England B drew 2-2 with Trans Tours in Christchurch, where a more serious fixture  on June 7 pitched them against the New Zealand full team. Daley and Richards played throughout the side’s 4-0 win, the midfielder taking the corner from which Dave Needham headed the opening goal.

Injuries were by now biting into a side, though, so Eves was summoned for the long flight across the world out of Heathrow by way of reinforcement.

He was certainly a man in form, having been among the scorers on the three-match end-of-season Norwegian tour Wolves had just completed.

“I’d also finished the League season well with goals against Chelsea, Manchester United and Villa,” he said. “We needed some points at that time to be sure of staying up, so I was on a bit of a high.

“I remember flying out to New Zealand with Tommy Langley, who was also called up late. I didn’t previously know him other than from perhaps playing against him in Chelsea-Wolves games. 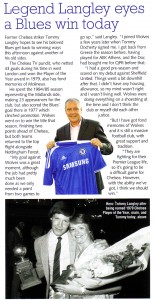 “I remember being jet-lagged when we started playing but my main feeling was that it was great to be there and to be getting some recognition from my country.”

Eves went on as substitute for Derby winger Gordon Hill in another triumph over the Kiwis, this time by 3-1 in Wellington, on the 11th of the month. Richards was ruled out on this occasion by a knee injury but Daley lined up before making way for Langley – the forward who was to have a brief mid-1980s stint at Molineux.

Three days later, the same two teams were in opposition in Auckland and, while Richards once more sat it out, Daley, Eves and Langley went on for Owen, Hill and Hollins respectively in another 4-0 England victory. Daley’s replacement in the starting 11, Micky Speight of Sheffield United, scored once, Brian Talbot twice and Mariner once.

The seventh and final fixture on the trip was a stop-off on the way home, with Singapore providing the unlikely opponents.

The fact that Richards had to go off to be replaced by Langley suggested he missed out on some rich pickings but Eves bagged his only international goal and Daley and Langley were also on target in a crushing 8-0 win.

“In hindsight, it might have been wiser for me to stay here and have my knee properly looked at,” Richards added. “As it was, I came home from the trip, had my third operation and made a late start to the following season.

“It wasn’t an enjoyable tour for me from a playing point of view, although Bobby Robson was very supportive of my problems and made it clear he wanted to give everyone a chance. I found it a great honour just to be involved and was delighted to see some of New Zealand. I loved the place”

Eves had had an earlier taste of international football, with England Schoolboy honours going his way when he played alongside the former Bristol City and Crystal Palace forward Kevin Mabbutt (the lesser-known brother of Gary) in games against Wales and Scotland.

He, too, relished the opportunity and was thrilled at steering home a close-range right-foot shot for what was his only England goal at any level.

“I was playing up front with Paul Mariner,” he recalled. “It was a tremendous experience. When you think what a legend Bobby Robson was and remember everything he achieved, it was such an honour to work with him, even for a short time like that. 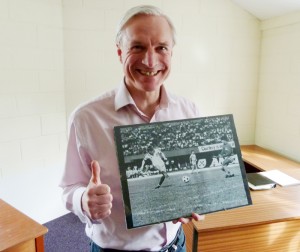 Mel Eves - with the vital evidence from Singapore.

“I’ve got a couple of pictures of my goal against Singapore. One is hanging on the wall of my office in Chapel Ash and the other shows Paul on the edge of it – he might have set my goal up.

“We had a night in Australia on the way back as well if I remember right and I still bump into lads around the country who were on the trip. We are all happy to reminisce about it. It was some experience.”

Corrigan, Hill, Hollins, Mariner, Richards and Talbot had played full internationals prior to the tour. Anderson and Kennedy did so later.