Wanderlust Of Promising Winger Who Broke Through After Molineux

Charlie Bamforth, for whom no challenge is too great when it comes to tracking down the players of his youth, has delivered again. Just in time, he has located an early 1960s Molineux reserve in Cornwall – a few months before his ‘target’ emigrates for the second time. 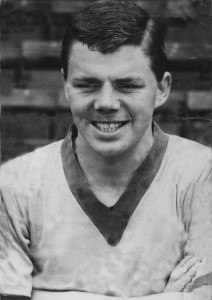 Vic Povey with Wolves in the summer of 1962.

“They said at Wolves that if two out of every 100 young players made it the first team, the club were happy,” says Vic Povey.

Unfortunately, Vic didn’t quite make that select 2%. But he presumably wasn’t far away because he had a Football League career and then did well in overseas football.

He was born in The Scotlands district of Wolverhampton in 1944 and attended Bushbury Hill Secondary Modern, playing for the school, town and county as an inside-left.

“I had intended to sign for Aston Villa,” he recalls. “Although I was a Wolves supporter, I had heard that Stan Cullis would make you into a winger if you were small. ‘That’s not true,’ said Cullis, so I signed and he promptly handed me a no 7 shirt!

“I played as an amateur for a couple of seasons, training twice a week from 6.30 to 8.30pm under the stands. I worked in an office owned by one of the directors, Mr. Clifford. Nevertheless, I went two or three times to Aston Villa with a view to signing but, in July 1961, I signed professional forms for Wolves at ₤9 per week, with ₤2 extra if I played in the Central League side.

“We were all good pals…..Freddie Goodwin, Clive Ford, Ray Aggio and the rest. They were in digs but I was living at home and, when I got the bus late in the afternoon, I wouldn’t see anyone until next day at training. Mind you, that’s how Cullis liked it! He certainly kept tabs on you.

“Stan was everything that anyone has ever written about him. One minute, I was playing at the school with a gentle games master sympathising if I got a scratch and the next, I’m with Stan Cullis, who wasn’t like that! I remember John Harris coming back to training six weeks after breaking his leg against Villa and shuffling round the track like a penguin. Cullis called out: ‘Come on, John, it’s in your head!’

“One day, in a practice game, the boss thought I was too close to Bobby Thomson, the full-back I was up against. ‘Have you married the guy yet?’ he yelled. ‘Have you kissed him yet?’ I couldn’t work out what he was on about until he explained that I was too close to Bobby and he wanted me to put some distance between us. But he taught us all so much. It was marvellous that someone would take so much interest.”

But Vic Povey had so much competition on the wing. “Noddy Hinton and Terry Wharton were a couple of years older, then there were David Thompson and a smashing little winger from Blackpool called Ray Brennan,” he added.

“There were excellent youngsters in all positions. Alan Ball was being hawked around by his dad; shock of red hair, tiny, in a no 10 shirt. I remember him screaming to an England international to pass and move. You could see he was good. But there was talk Alan Ball Snr was asking too much and there was no way Stan Cullis would agree to that.

“I remember Bobby Moncur coming for a trial but we already had Bobby Thomson, who was faster than lightening. Cyril Knowles came and played a game in a no 11 shirt but was no bloody good! A short while later, he signed for Spurs as a left-back from Middlesbrough for £100,000!” 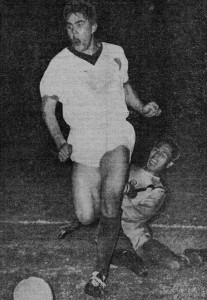 Vic in action in Sydney against Hong Kong in 1967.

“There was a game at Stoke and I was told to go home and get smartened up before getting on the team bus. I remember ringing my parents, who had just had a phone put in, all excited because I was travelling with the big names like Malcolm Finlayson and Gerry Harris.

“It was a mid-winter, midweek match on a wet, muddy night. I have thought for years it must have been a first-team game but the record books seem to contradict me, so I’m wondering whether it was either a reserve fixture where a lot of senior players were involved – or maybe a game in a minor competition that isn’t in the history books.

“We stopped at the Crown Hotel in Stone for something eat and Gerry said to me: ‘I think you might play tonight’ but they stuck a full-back on the right wing, which I guess told me everything I needed to know. Otherwise, the closest I got was a Colours versus Whites pre-season friendly between the first team and the reserves.”

Moving to Meadow Lane, Povey experienced one of the ultimate transitions in managerial style.

“Eddie Lowe was simply a lovely, lovely man, so easy-going,” he reflects. “Players with the slightest knock were excused training. Jeff Astle was always taking liberties. I remember once we were having an improvised game of cricket in the gym and Eddie walked in. ‘Just drop in at square leg, Eddie,’ said Jeff. I told my father that I had never seen anything like Jeff Astle. I had never seen anyone able to head a ball like that, yet he couldn’t even touch his toes. Eddie just wasn’t able to control him and make him train.”

Povey was in digs with Nottingham Forest’s young winger Ian Storey-Moore. All told, he played 35 Third and Fourth Division games in two seasons for County and hit three goals. Then Australia beckoned.

“I joined the Czech-owned Sydney Prague. It was good money and I also worked for a sports company and coached for the Sydney Morning Herald. One of our players was Jozef Venglos and I became a good friend of his. Of course he came to the Villa as manager much later (after Graham Taylor’s first spell there).

“I spent nine years in Australia, also playing for the Greek club Hellenic and the Polish team Polonia. The money was great and I started working for the company that imported Yamaha into Australia. But I was now 34 and thought if I was ever going to get home, I needed to do it then.

“So I came back and helped develop a business (Stafford Rubber Company) that made rubber products and shin-guards. We had a brand endorsed by Kevin Keegan (Patrick) and one by Kenny Dalglish (Puma). In no time, clubs like Arsenal, Manchester United and Liverpool were endorsing them. I paid them 2.5% royalties for use of their badge. 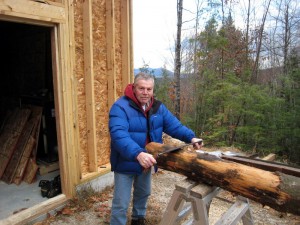 “I retired when I turned 54. My wife of 32 years, who is fromPrinceton, New Jersey, is a medical scientist. We were visiting an uncle in the West Country and she decided that she would love to live down there. So we moved to Truro and she works at the Treliske Hospital. But we have just finished building a three-storey log cabin on the border of Maine and New Hampshire in New England and will move there when we sell up in Cornwall.”

And Vic will doubtless continue his habit of cycling 150 miles each week.