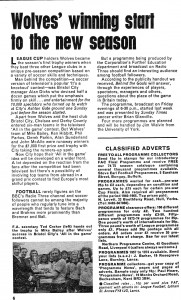 A Football League Review write-up of Wolves' success. Please click on image to try to enlarge.

Only the truly committed fan will remember but the League Cup wasn’t the only trophy Wolverhampton Wanderers won in 1974.

Almost five months later, Mike Bailey was being presented with another trophy in front of the TV cameras after coach Sammy Chung had taken a squad of six players to the West Country.

Chelsea, Derby and the host club were also present in front of a remarkable 10,000 crowd on Sunday, July 28, three weeks before Bill McGarry’s side kicked off their top-flight campaign with a 2-1 victory at Burnley.

The contest was an off-shoot of the then-popular It’s A Knockout series and concentrated on football skills such as ball control, shooting and dribbling and was the brainchild of City manager Alan Dicks.

Wolves were comfortable winners and picked up a £1,000 prize as well as a handsome trophy that was presented by FA secretary Ted Croker.

And supporters were able to enjoy the event when it was televised in the August under the programme name All In The Game. 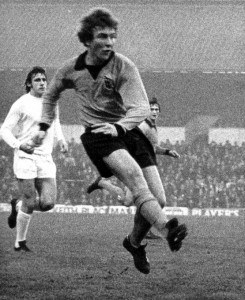 Sundy best......the maker of Wolves' winning goal at Wembley shone again in the heat of July.

There were plans to broaden the competition by inviting teams from abroad…..alas, the idea doesn’t seem to have gone much further. Unless, that is, you can tell us differently.

Do you recall tuning in to watch this Wolves win with a difference? Or did you even stop off at Ashton Gate on the way to or from a holiday in Devon or Cornwall?

We would love to hear from anyone with memories of the occasion. Please email us at info@wolvesheroes.com or by ringing 07734-440095.