Back! For One Issue Only 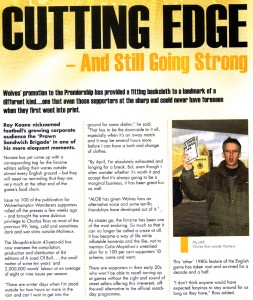 Wolves fans have the chance to properly sign off a proud chapter in their support of the club when A Load Of Bull returns this weekend for a farewell edition.

Almost 17 months on from when it was last seen on the streets, the popular fanzine is making a final curtain call and then being discontinued after 23 years and 158 issues.

Editor Charles Ross always planned a last offering to wind up a labour of love that has consumed him since he took over in 1993 from the publication’s founder, Dave Worton.

ALOB is one of the longest surviving fanzines, having been spawned in a pre-Sky era in which the Internet, radio phone-ins and, for many, even mobile phones had barely been thought of.

“Once, there were a few people with so much to say,” Ross writes. “Now, there are so many people with so little to say. Our voice has gradually become drowned out.”

Wolves are paying handsome tribute to the fanzine and its editor in the programme for tomorrow’s game against Bolton and we at Wolves Heroes were flattered to be among those asked to pen a piece.

Subscribers will also be able to rest assured that they have signed off their support of the long-running project by helping needy groups in the Wolverhampton area.

Ross adds in print: “When I wrote to 457 subscribers in March, 2011, they were given the option, in the event of ALOB not being resurrected, of either having a refund of the balance of their sub or of that money being donated to the club charity.

“Not one single subscriber took the refund option. With 353 subscribers still in credit after this issue, this leaves £2,049 for charity. I’ve added £208 from our fighting fund, so a cheque for £2,257 has gone to the Wolves Community Trust. 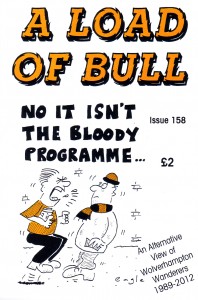 “They will use this money in their disability sports programme, especially to help youngsters in local schools with disabilities and special needs. It’s a fabulous gesture from our subscribers.”

Contributors, who have included the likes of Johnny Phillips (now on Sky TV), Peter Lansley (The Times), Daz Hale (BBC Radio WM) and Wolves In 20/20 Vision author Jim Heath, were also responsible for compiling the successful 1997 book We Are Wolves.