Search On For Information About Cup Winner

Ted Collins - was playing for Wolves 100 years ago.

We have been contacted by the great nephew of Ted Collins, the FA Cup-winning full-back who played more than 300 games for Wolves early in the 20th century.

Cheshire-based Ray Bradley is compiling a family tree and hopes readers of Wolves Heroes might help him fill in one or two blanks around the life of the man who appears at no 32 in the Legends area of this website.

“Over the years, I have lost touch with Uncle Ted’s (and my) relatives in Wolverhampton and am now anxious to make contact with them,” Ray writes.
“He lived at 65 Newbridge Street, Wolverhampton when he died in 1955 at the age of 71. My family used to travel to Wolverhampton during the 1940s and 1950s to see the Wolves play and meet up with Uncle Ted, who was a steward at Molineux for many years. He always proudly wore his Cup winner’s medal, plus a gold chain and watch that were presented to him by the townspeople of Wolverhampton.
“Any guidance or help you or your readers can give me would be greatly appreciated.”

Collins made his debut in a Black Country derby at home to Albion in 1907 and totalled 307 games for the club, the last of them at Stockport in April, 1915. The highlight of his career was the shock 3-1 final victory over Newcastle at Crystal Palace in 1908.

Ray is from a family of Aston Villa fans but adds: “My grandfather Lewis Collins (and his brother, my great Uncle Ted) both played for Brownhills Albion at the start of the 20th century.

“Lewis was offered a contract by West Bromwich Albion but decided to join the South Staffs Regiment (he probably thought it was more secure) and played soccer for both the Regiment and the Army at several big League grounds.

“He then went to South Africa to fight in the Boer War and I have his South Africa Campaign Medal. Upon his return, he left the Army, married my grandmother and they lived in Aston, where he worked for Birmingham Corporation until he retired.

“My family became Villa supporters but, because my grandfather was born in Wolverhampton and the fact that his brother Ted had played for them, we always had a very close affinity to Molineux.

“The Villa often used to play Wolves at Christmas in the late 40s, with big crowds, no segregation and no trouble. The supporters of both teams got along very well. The games were very competitive but both teams respected each other. There were a number of players and managers who were with both clubs over the years and Major Frank Buckley’s brother Chris was a Villa director and chairman.” 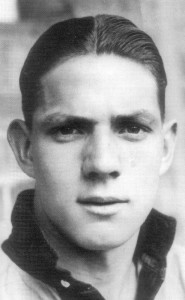 If anyone can help Ray in his endeavours, they are welcome to do so through us, either via email or by ringing 07734-440095.

Footnote: Ray Bradley sold his touring caravan several years ago to the nephew of Dicky Dorsett, who was a member of Wolves’ FA Cup final team in 1939 and then had several years at Villa.