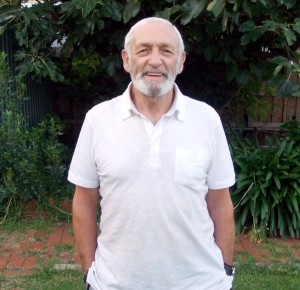 Joe Wilson in the garden of his Melbourne home late last month.

You would think Joe Wilson had never left Workington, so rich is his Cumbrian accent. And that cheery grin is just the same as when he was that stocky, take-no-prisoners right-back in the side who took Wolves back to premier billing in 1967.

As Joe and I spoke in his garden in the northern suburbs of Melbourne, he admitted that it’s a bit of a struggle these days to remember all the wonderful things happening at Molineux at the time. His memory is not what it was but he has no doubts about the latter-day game in a country that he has now lived in for nigh on 40 years.

“I much prefer to go to watch the rugby league down here,” he says. “Cracking team.”

We shouldn’t be surprised at this disclosure. Joe’s father was groundsman at Workington Town’s rugby league ground, first at Borough Park and then Derwent Park, to which they moved in 1956, when Joe was 19.

“As a lad, I used to play rugby and football,” he added. “I loved them both. In football, I played all over – any position to get a game.”

Joe doesn’t say whether it was with his dad’s approval that he chose football over rugby but he joined Workington AFC as an amateur when they still shared Borough Park with the rugby club at a time when the manager was the inimitable Bill Shankly.

In those days, of course, young men were also in line to be called up for National Service. “I failed my Army medical and went to work at the pit surface, pushing steel drums loaded with the stuff that had been dug out.”

Small wonder he developed that stocky and compact frame, which set him in such good order as a full-back who, as Dave Maclaren told me, loved nothing more than getting the winger between himself and the touchline and then……look out! The Scottish keeper, who would play alongside Joe Wilson for a season and a half at Molineux, added: “And he was always the life and the soul of the place with his accordion!”

In those early days in Wilson’s career, Workington’s reds were in the old Division Three North and then the Fourth when reorganisation took place in 1957. He would play 153 League games in his stay and hit five goals.

The manager in the latter part of his time there was Joe Harvey, who would become such a success later at Newcastle United. Over at Carlisle, the gaffer was Andy Beattie and, being in proximity, the man who also managed Scotland got a pretty good idea of what Wilson was capable of with his tough tackling.

Fate played a hand in January, 1962, when Workington put up a pretty good fist against Beattie’s Nottingham Forest in the FA Cup third round, losing by the odd goal in three. Forest were run by committee in those days as opposed to a board of directors and the decision-makers met in due course. A couple of months later, Joe got the call to the City Ground.

“I think the fee was ₤7,000. The next week, we were playing at the Hawthorns. Andy Beattie says: ‘Do you want to play today or watch?’ I replied: ‘If you wanted me to come to Forest, you’d best play me, eh?’”

Joe would turn out in 84 First Division games for Forest, hitting a solitary goal. “With that transfer, I went from ₤7 basic wage to ₤10 basic, increasing to ₤15 if we won. A bit less than they get these days!”

And his toughest opponents? “Best, Charlton – and Bertie Auld. It was really after facing him that I learned a few tricks!” Joe grinned. Auld was legendary for getting his retaliation in first.

When Joe and I retired to his living room and looked over his slim collection of cuttings, I found it interesting that there were several pertaining to George Best and his passing. 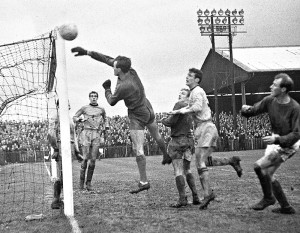 Joe, in his native Cumbria, guards the line as Dave Maclaren saves in a game at Carlisle in February, 1966. Photo courtesy of Carlisle Evening News.

He quickly became a firm fan favourite at Molineux but I had to ask the question: How was it to play in that 9-3 defeat at The Dell? He smiled ruefully.

“Aye, not good. But it wasn’t the first time for me. I was in the Forest team who lost 9-2 at Spurs in 1962. Cliff Jones had wings. I remember Beattie turning to me at half-time to say: ‘Don’t let them score any more in the second half, laddie.’”

Fifty-eight Division One and Two games later, with the Wanderers happily restored to Division One in 1967 but Gerry Taylor now taking over in the no 2 shirt, Joe packed his accordion again and made his way on a free transfer to Newport County, where he would appear in 43 Division Four games.

“I liked it at all my clubs except Newport,” he says. “My wife Irene was always a great supporter. It’s so important to have a wife who settles and with whom you can enter into the great spirit of the various clubs.”

Happily, Joe got the call from George Aitken to go back to Workington in September, 1968, and he would go on to appear 169 more times in the Reds’ League side, scoring four goals. A young colleague at the time was a certain John Burridge.

Australia beckoned in 1973. “There was a lad at Workington called Phil Copeland who had played out here and he urged me to give it a go. I met with the George Cross club and they paid our fares on the ship. And we stayed. I only played a few games before my knee gave out on me. But I got a good job with the Hoechst Chemical Company. They dealt with powders and stuff of the type I was familiar with around the mines. But the asthma was causing me a problem so I went into the warehouses handling the boxes and pallets and so on.

“I did some coaching there and later with Altona City. There was a great camaraderie, a good social life.”

Joe lost his wife not long ago and is rather wistful as he shows me the family photographs. For my part, I am happy to tell him of my special memories of watching him bull-like in the face of wingers who needed to be put in their place. And I was also glad to pass on the good wishes of a couple of former colleagues.

Les Wilson (no relation) said: “My memories of Joe are that he was a very hard-tackling, hard-nosed, enthusiastic full-back.  A complete team player.  He was renowned and legendary for some of his bone-crunching tackles. He led by example in this department.

“I recall some of the discussions in the dressing room with Joe.  He was quite critical of some of the high-profile players in the game – suggesting they were overrated poseurs. Joe made no bones about this and other matters.  He was always transparently honest in his beliefs on the game and especially when things were not going well, even with his own game. If he made a mistake, he was the first to put up his hand and say it was his fault.

“Joe was true to his word and gave 110 per cent for the club. I can still feel the bruising from one of his tackles from a practice match that we had at Molineux – first team versus reserves – four and a half decades ago!” 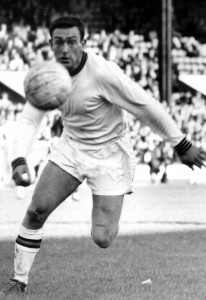 The stocky full-back at work in another game from 1965-66 - this time a 3-0 Wolves victory at Leyton Orient.

And Alan Hinton, briefly a colleague at Forest and also an opponent while at Wolves and the City Ground, says: “Joe Wilson was an extremely popular player in the locker room and with the fans at both Nottingham and Wolverhampton. He was a very tough defender who wanted to win.

“I played against Joe a few times and think he won the battle.  I once went to a game at Wolves where there was a delay, so Joe went in goal and entertained everyone, including me. He was always happy but very focused on winning. Give him my best.”

It was a privilege for me to do exactly that.