Charlie Bamforth, now reunited with the luggage he lost travelling to and from Australia on business, revels in a meeting Down Under with a star of his youth…… 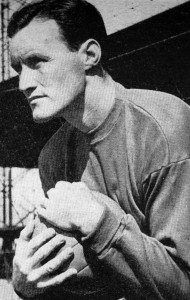 1877. In Wolverhampton, football greatness was spawned in the shape of a certain football team who would become renowned for their old gold shirts. Across the globe, in the same year, two brothers by the name of Fitzgerald founded a brewery in Brisbane that would become famous for a beer by the name of Castlemaine XXXX, sold in a golden can. And why that name? It was after a brewery they already owned in Castlemaine, Victoria – hub of the Aussie gold rush.

These institutions came together for me recently, when I was in Australia in my day job in the brewing world. More importantly, I struck gold in Castlemaine. For as I stepped off the train from Southern Cross rail terminal in Melbourne, I was met by a real Wolves hero of mine, David Maclaren.

It had taken a long time. In the late 1980s, I researched and wrote my book about Wolverhampton Wanderers goalkeepers, In Keeping With The Wolves. From Bert Williams to Tony Lange, I had reached most of them for interviews and adulation. But not all. In those pre-Internet days, it was far tougher to research and locate the people one wished to document. And so it was an enormous regret that I failed to find the great Scot, although I knew he was somewhere in the Antipodes.

But now, thanks to David Instone and John Richards, I had a name and a number. And I could now meet this still handsome and erect keeper, who would go on to become a valued coach at Wolves under Bill McGarry.

It really wasn’t my intention to interview Dave. He had already been featured by Wolves Heroes. I simply wanted to enjoy his company and reminisce. But, as I travelled back to Melbourne several hours later, my mind was racing with the wide range of anecdotes that he had shared with me. I started to scribble.

We had lunched in a charming little bistro in the historic small town that boasts the oldest theatre in mainland Australia. Dave had parked his smart car just outside, in a one-hour-limit space, yards from the police station.

“Hopefully no ticket,” he said. “I’m a Scot and hate paying parking fines.” He chuckled.

As we tucked into our salad (him) and pie (me – I am a ‘pie eater’ from Wigan, after all), the conversation flowed. At times it was poignant,  but more often simply hilarious.

I threw my head back and roared when he told me of a centre-half he played with (not at Molineux) who had a terrible stammer. On one occasion, Dave was struggling to deal with a high ball and, after much exertion, realised it wasn’t going to be a problem. The ‘pivot’ was behind him and could see quite clearly what was happening. “Why didn’t you call?” Dave asked him. “I tr…tr…tr…tr….tried,” said his colleague. This was in the days when a telephone call necessitated speaking to an operator, so Maclaren used to start the calls for his stuttering team-mate when the latter wanted to call his girlfriend.

We moved on to some of his other colleagues. At Southampton, he recalls how some well-known forwards really didn’t fancy practice games when Cliff Huxford was on the other side. “I remember one famous centre-forward who scored six in the first half of one game but, when Cliff was in opposition in the second half, stayed in his own half of the field.” 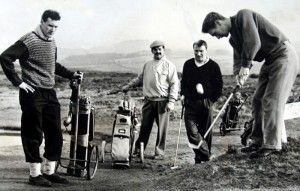 Maclaren (left) playing golf with his Plymouth team-mates in 1961.

Then, there was the time in Maclaren’s first training session at The Dell that another prominent Saint (sic) followed through maliciously. The keeper grabbed hold of him and threw him aside, earning an early bath!

Dave told me how he got his big chance. He was reserve to Bill Brown at Dundee (‘a great keeper’) but Brown had to miss a game to attend a funeral. Maclaren went in for his only appearance for the club. Soon after, he was travelling back by train from a reserve game at Queen of the South in Dumfries and was playing poker. For the only time in his life, he was dealt four aces. The manager had been sitting with someone who turned out to be the Leicester manager and chose that moment to ask Dave if he had a minute. “Do you mind if I finish this hand?” asked Maclaren. The other players stared at him and threw down their cards! Despite the disappointment, David Maclaren signed for Leicester.

“Dundee had wanted to sell Bill Brown to Coventry to replace Reg Matthews, who was off to Chelsea. But he wouldn’t go (he would go on to join Spurs), so I was transferred instead.

“I had just arrived at Leicester when, on the Friday, I asked the trainer if I could get a couple of the youngsters to come down and fire some shots at me. ‘No balls on a Friday,’ I was told. ‘Not seeing one will make you hungrier for it on the Saturday.’ He went to the manager and told him to look out – I was a troublemaker!

“Another game……we were losing in the last few minutes and I got kicked in the head. No subs in those days. When they brought me round, the trainer said: ‘Okay, on to the left wing for nuisance value.’ We were 5-0 down!

“I was privileged to have had Gordon Banks as my reserve at Filbert Street. I learned from just watching him. He was one of the very best, alongside Bert Trautmann and Pat Jennings.  I had no organised skills training until I joined Malcolm Allison at Plymouth. Great coach.”

It was from Plymouth, of course, that Dave moved to Wolves in January, 1965. It was the following season that he featured as a regular in the first team – and the story is well versed, of course, of how he let in nine against Southampton but nevertheless played so well at The Dell that the Saints signed him within the year.

He lists his time at Molineux as one of the happiest of his career, both as a player and then, some years later, when he was one of the few behind the scenes to survive the Ronnie Allen sacking and become a trusted coach with McGarry – ‘a great man.’

We talked of some of the players he knew at Wolves. “Waggy – what a winger! Ron Flowers – wonderful player! Duggie Woodfield – what a trainer! But, no matter what he did, he couldn’t get the extra yard of pace that would have made him a great.”

Dave was surprised when I told him that, as a younger man, Ron had embraced cricket. Dave loved that game, too, and knew of Flowers’ golfing prowess. But Dave was a big hitter.

“Ronnie Allen bet me I couldn’t hit a golf ball from the corner flag at Molineux over the big terrace. Goodness knows what the people passing by the Molineux Hotel must have thought when that ball appeared out of the sky.”

The stories conetinued to come fast. Like how he walked down Bill Shankly’s street soon after the manager had left Liverpool. He found Shanks up a ladder. “Aye. Davy, look at these windows,” he said. “They’re the cleanest on the street!” Also, of how he played in a charity match in the West Country as a youngster alongside one of the all-time legends of the game but a man who demanded ₤50 before the game if he was to bother turning out and then after the game was the only one to demand petrol money – even though he had travelled from the north as a passenger with another icon. 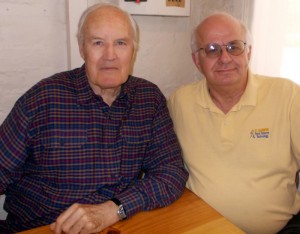 The writer (right) and his latest subject.

Dave loved to play at Ipswich and Sunderland…and Charlton. “The nearest supporters at The Valley were below the level of the pitch. In one game, when I was with Plymouth, a fan had a go at our full-back George Robertson, who jumped over and had a go at him. The next thing we know, he is clambering back on to the pitch with his shirt all torn.”

A name that means something at Molineux is Jack Kent Cooke, the entrepreneur who fancied buying Wolves and shipping them as a franchise lock, stock and barrel to Los Angeles. Later, Cooke was angling for a new manager for his US soccer team. He called Dave. “Hi, I am speaking to you from Beverly Hills.” Dave thought it was a joke and put the phone down a couple of times. Finally, he listened but it was the wrong time for his young family to be uprooted, so he recommended a keeper colleague, Ray Wood. He didn’t last long.

After our waitress had obliged with the camera, Dave handed me a signed photo from the late 1950s at Ewood Park, Blackburn – an amazing picture of him diving horizontally several feet off the ground and catching the ball cleanly. It seems like only yesterday.