Located At Last! Face-To-Face With Freddie 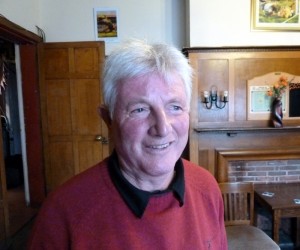 Freddie Goodwin pictured in front of the Wolves artefacts in The Wanderer pub next to Molineux.

By any stretch of the imagination, tracking down Freddie Goodwin is a prize ‘catch’ for this website.

For more than three years, we had been seeking information as to his whereabouts and had pursued him, through various forms of communication, literally across the world.

Les Wilson had an address and number for his 1960s Wolves team-mate in New Zealand from a scouting visit Down Under as manager of the Canadian national team, when he had surprised him with a catch-up phone call from his hotel room. But our attempts at establishing contact through the same means some two decades later met with failure.

Fred had not only emigrated to the furthest corner of the Earth, he had apparently dropped off the edge of it. Yorkshire-based David Thompson recently recalled a chance meeting with him at Manchester Airport around eight years ago but enquiries to their many mutual former Wolves colleagues drew a blank, as did approaches to a Kiwi club for whom Fred was known to have worked.

As is often the case, though, the trickiest of problems was solved by the most basic of solutions; not to mention a hefty slice of luck.

A match-day meeting I had on another subject with Wolves super-fan Tony Cowley in Wolverhampton city centre in mid-March brought the surprise disclosure: “I’ve been speaking to a former player this week – Freddie Goodwin.”

Tony, known to the owners of this site for well over 20 years, travels to Wolves games from the Isle of Man (that’s EVERY game, by the way) and wouldn’t, on the face of it, have appeared to offer much hope of leading us to a man in the Antipodes who played 47 matches for the club from 1962 to 1965.

But, at the same time as Tony was seeking the go-ahead to pass the relevant contact details on, we were receiving a flurry of phone calls in answer to the ‘PLEASE! Does anyone know Freddie Goodwin?’ letter we had just sent to Stockport’s weekly newspaper. Suddenly, well-meaning folk were queuing up to lead us to him and various members of his family.

Fred did more than quickly ring us on hearing of our interest and promise us all the time and help we needed for an article. He even revealed that he was about to visit England and drop in on Molineux for only the third time since being sold by Ronnie Allen in the middle of 1965-66. Result!

My first meeting with him was not long in coming. It took place on the morning of the March 31 Wolves v Bolton game as he and his mate Dave Hough, a North Wales-based fan who had been another valuable go-between in the connection process, tucked into one of Dawn’s hearty pre-match ‘full English’ breakfasts at The Wanderer pub. 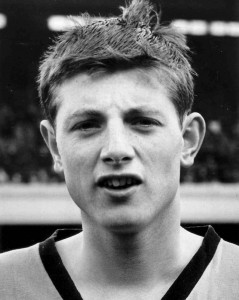 Ready for action at first-team level 50 springs ago.

The second was almost a fortnight later at Edgeley Park. Well, where else would the one-time wing-half gravitate to on a trip back to England other than the very different homes of Wolverhampton Wanderers and Stockport County, his two favourite clubs?

Here was a surprise, though……he wasn’t living in New Zealand at all, nor had he for the last decade and a half. He was in France – and still is.

Goodwin certainly has his memories. He once played in an 8-1 Wolves win over Manchester City (what price on that result last weekend?), he was their first used substitute in the Football League, he played under Stan Cullis, tasted promotions and relegations and even worked as no 2 to the New Zealand national team. So we had a lot of ground to cover in our interview. We’ll be back with his story on Sunday.