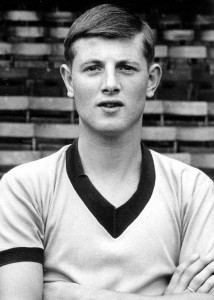 Freddie Goodwin in his fresh-faced youth at Molineux.

Freddie Goodwin appeared for Wolves in an FA Youth Cup final, made his first-team debut against Albion in the FA Cup and was blooded in the League away to Arsenal.

But it was his final senior appearance for the club that was probably his most significant; at least historically.

It came more than a year after his penultimate outing and was the only one he made as a substitute. In fact, it was the first time anyone had gone on for Wolves from the bench in a competitive League or cup fixture.

October 16, 1965 was already a notable date as it was the afternoon on which Wolves overcame Middlesbrough in the Second Division to record what would be a fourth successive 3-0 victory that month. Goodwin’s entry in the 47th minute of his 47th first-team match made it even more newsworthy.

He had been playing at inside-left in the Central League team, most recently against Albion, but took over the substitute duties against Boro from Les Wilson, who went with the reserves to Newcastle that day instead and would – at Everton two seasons later – become the first Wolves ’12th man’ to go on and score.

Against Boro, Goodwin was sent on in place of Ernie Hunt, who had passed a fitness test on a facial injury and then succumbed just after half-time to a foot problem. “It’s a piece of history and I’m proud of it now,” the former wing-half says.

“I suppose I might have been an unused sub once or twice before that because that was the first season they were used in League matches. On other occasions, I would have gone up to the town centre with a few of the lads to the Woolpack or the Queens, where we went on Fridays after the teams were selected, and told them how miffed I was at not being picked!”

Goodwin, not to be confused with the former Birmingham and Brighton manager of the same name, has spent a decade and a half of his post-playing life in New Zealand and, at the age of 68, is now resident in contented retirement in France. In 1959, even coming down from Stockport to the West Midlands was a case of exchanging one world for another.

“I was spotted by Wolves playing for Stockport Boys and Cheshire Boys,” he added. “Another lad, Wayne Devonport, who had attended my school, went to Molineux with me but didn’t stay long and had a non-League career. He lives in Stockport but also has a place 20 minutes away from us in France.

“I signed as a 15-year-old and Billy Wright was just retiring. One of my early memories at the club is of him announcing his decision to everyone. He had a big do at the Civic Hall.

“There were two other dinners I went to…..one held to celebrate Wolves winning the League and another when they won the FA Cup. I also went to Wembley with a party from Molineux for that 1960 final against Blackburn.

“I have such fond recollections from my time at Molineux, like seeing that brilliant Barcelona side beat Wolves in the European Cup. But even my first day was special. I remember seeing the ground and thinking how magical it looked. It was such a famous place and I was in awe of it.

“I only really knew Edgeley Park (Stockport), although I had once gone with the father of Paul Warhurst, who had a terrific career playing with various northern clubs, to watch Stanley Matthews play for Blackpool at Manchester City. He didn’t have a kick!”

Like the object of their childhood eyes, Goodwin had also played on the wings in his schoolboy days and most of his early matches at Wolves were spent wide wide on the left in the Wolverhampton Amateur League.

He was right-footed, though, regarded himself as a midfielder and was switched to right-half. Unfortunately, that was an area in which Wolves were infamously powerful.

“Their main half-backs when I arrived were Ron Flowers, Bill Slater and Eddie Clamp. I was in digs with Barry Stobart and John Galley at Mrs Clamp’s. Alan Ball stayed there as well when he was on trial. I think his Dad was just touting him about. 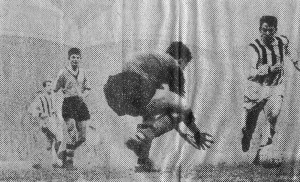 First-team debut day....looking on as fellow newcomer Fred Davies gathers in the FA Cup derby at home to Albion in 1962.

“Johnny Kirkham then emerged and Ken Knighton was a good player as well – a bit unlucky not to play more because he had a lot of ability and a good reading of the game which helped him over a lack of pace. Goodwin, Woodfield, Knighton was a familiar half-back line in Wolves’ lower teams.”

We will be saying much more soon about the Wolves team, Goodwin included, who excelled in the Youth Cup in 1961-62. They lost by the only goal over two legs to Newcastle in the final but proof of what a talented crop it was came with the first-team careers that were spawned.

“We were all groundstaff boys,” Goodwin added. “We would have been called apprentices in more recent years. I was selected for an England youth international against West Germany with Bobby Thomson but we were playing Chelsea in the Youth Cup at the same time, so we had to put the club first. I still have the letter telling me of my selection. I was later tipped for a game in the under-23s but didn’t make it.”

Goodwin is affable company and leaves the Kiwi accent to his second wife Wendy, who he met 20 years ago and married in 2011. His own tones remain very much Greater Manchester.

Having settled back in Stockport in the mid-1990s so he could spend time with his mother in her final years, he partnered Wendy in a successful sports gear business that was based at various markets as far afield as Wales. The work ethic was strong.

Les Wilson recalls him as a consummate professional, ‘a great reader of the game, a wonderful passer of the ball and a player who worked his socks off and was always encouraging his team-mates.’ 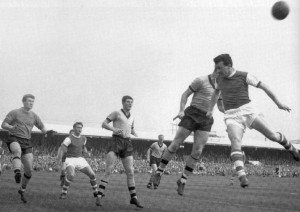 “I was very fit,” he added. “That was one of my strengths. My biggest disappointment was not scoring in Wolves’ first team because I had got goals in all the other sides at the club. But I was told to be more defensive when I played in the First Division and FA Cup as we had Ron Flowers at left-half.

“I had a good run from the start of 1962-63 when I kept my place for a couple of months or so. City weren’t a good side when we beat them 8-1 on the first day but they did have Bert Trautmann in goal.

“The win at Spurs soon afterwards was one of my big highlights because I marked Jimmy Greaves. We won there and, a week later, we played them at Molineux and were two up at half-time. Stan Cullis asked me to get forward a little bit more and I enjoyed that. Greaves let me go and, in no time, it was 2-2. He had scored both goals. It was a big lesson.

“Another decent game for me was at home to Blackpool, possibly the season after. I was injured and came back on playing on the right wing. I whizzed a shot just past the post and think it was the first time I got man of the match.”

Goodwin, having made his debut the previous January three weeks after his 18th birthday, played 15 matches in 1962-63 and 22 the season after. He had another promising start to 1964-65 but was named in the 11 only once in more than a year following Stan Cullis’s departure.

His marginalising made his own Molineux exit predictable enough but why the big drop into the Fourth Division from a still-ambitious Wolves in the Second?

“I think Stoke, Rotherham and possibly Portsmouth were interested in me but I decided to go home to Stockport,” he revealed. “My parents had split up and I had no father figure in my life really.

“I had supported Stockport as a lad and my mum lived right opposite the ground and had various young lads staying with her, fixed up by the club. One was a centre-half called Dougie Griffiths, who had been at Wolves after me.”

Goodwin was taken to Edgeley Park by the legendary Trautmann, who had moved on by the time the player underlined his versatility by filling every position for County, including twice taking over during matches as an emergency goalkeeper. 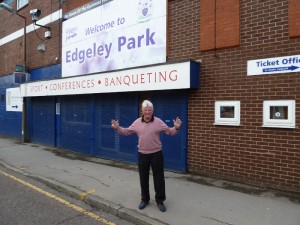 Back recently where his love affair with football began.

He made 176 appearances and scored 20 goals for them before joining Blackburn, where he cemented his firm friendship with Ken Knighton. Then he went on to Macclesfield, Stockport again, Southport and Port Vale before doing the round of non-League clubs in the same area.

The life-changing decision to head for New Zealand came because that’s where the job offers came from. He coached and managed clubs around Wellington and Auckland and even had a spell of more than a year as assistant manager to the national team. Much more of his post-Molineux career will be featured in a special 1960s issue of the Backpass retro magazine this summer.

But keep your eyes on this website for news of why he and Wendy, who now live in a rural area near Limoges in central France, will shortly be back in the UK for the second time in a month.