The Perils Of The Play-Offs 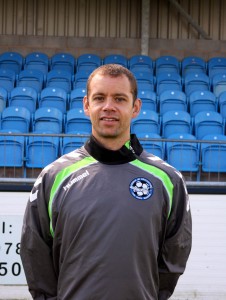 Jinky in his days in Welsh football. Picture courtesy of Airbus FC.

Jamie Smith could be forgiven for breaking out in a cold sweat each time the play-offs come around.

Three times out of three in this tense end-of-season overtime – twice with Wolves and once with Brentford – he was left heartbroken. But there was also some consolation along the way.

The one goal the speedy Brummie-born full-back managed in 104 first-team appearances while at Molineux came in a semi-final first leg at Crystal Palace in 1997 and presumably played a part in his move to Selhurst Park soon after.

Smith, born in the year of the club’s first League Cup triumph and given his debut as a 19-year-old on the same day that Neil Emblen and Steve Froggatt were blooded for the first time by Graham Taylor, was on the sidelines at the end of 1994-95.

The last of his 28 appearances in that promising fledgling season came at Charlton in mid-April but he recovered from a less satisfying 1995-96 campaign to see off the challenge of Serge Romano and figure in 38 of the 46 League games the following year.

He was big news at the time. Not only was he the first player for a decade to come through the Molineux youth system and cement a regular first-team place, he was also selected for the England under-21 squad after only ten senior games and would join Dean Richards in the Football League under-21 side.

It was in the climax to the 1996-97 season that he impressed Palace by scoring against them. When Steve Coppell took him there in the following October, Wolves did well enough by receiving Kevin Muscat and Dougie Freedman in exchange.

“I played a lot of games for Palace (175) and would have played more but for a spell on the injury list with cartilage trouble,” said Smith, who initially found himself in the top flight with the Eagles.

They came straight down again and, by the time they next went up, in 2004, he had retreated to the fringes of their squad.

In the summer of that year, he moved as a free agent to Bristol City. “While I was on loan at Fulham, Palace were looking to reduce the wage bill and were offloading a lot of players,” he added. “I was on the verge of a permanent move to Craven Cottage when Kevin Keegan left and it fell through. When Bristol came in for me, I’d been training on my own and hadn’t had a proper pre-season training programme, so I was playing catch-up, fitness-wise.”

Smith made 43 appearances for Brian Tinnion’s Robins in that 2004-05 campaign, scoring two goals, and became a room-mate of Bradley Orr, who is currently fighting a survival battle with Blackburn.

In a throwback to his Molineux days, there was the disappointment of a promotion near miss in the form of a seventh place, just outside the play-offs, and the big things expected for the following term never materialised.

Only one win came in the opening six League games before Bristol suffered their biggest League defeat in living memory – a 7-1 humiliation at Swansea. Amazingly, it wasn’t even the biggest loss in Jinky’s career. With Palace in August, 1999, he had found himself on the end of the same scoreline at Huddersfield. 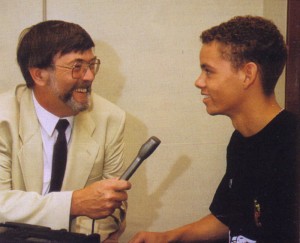 The young Jinky being interviewed for Clubcall by Mick Tranter.

Smith’s time at Ashton Gate came to an end after the arrival of Gary Johnson as Tinnion’s replacement and a loan spell at Brentford towards the end of the season took him down a familiar path.

“Martin Allen was the gaffer and we got to the play-offs, only to lose out,” he recalled. “When Martin moved on to MK Dons, I followed him.”

By now well into his 30s, Jamie retired at the end of 2006-07 after 314 League games. Insert his name in the search engine above right to see what he has been up to since.