That’s What You Call Team Spirit

Friends Reunited By Their Own Initiative 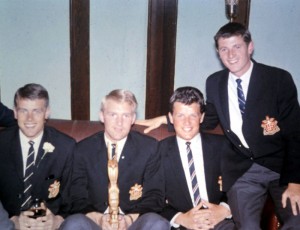 The way we were.....from left, John Galley, Ken Knighton, Peter Knowles and Freddie Goodwin on Wolves' tour of the USA and Canada in 1963, a year after all four had faced Newcastle in the FA Youth Cup final.

Football reunions are nothing new. Birmingham City’s promotion squad from ten years ago will reconvene this summer, members of Wolves’ two League Cup final winning sides were back together in March and even long-forgotten Third Lanark, Paddy Buckley and all, had a bash recently. But we think this one was extra special.

It wasn’t organised by commercial staff with the idea of giving corporate customers a night out. And there certainly won’t be any profit shown. The only paying guests at this one were the players themselves.

It was a private do, with no fans, and with a suggestion that name tags should be worn. No wonder……in some cases, this was a first meeting of old team-mates for half a century.

When John Doughty had the idea of reassembling his old team-mates, he wasn’t sure it would actually come off. So he counselled the opinions of Jim Barron and Fred Kemp and feelers were put out. The feedback encouraged him to go further.

And the enthusiasm for his ‘project’ was reflected today when the group – calling themselves the last of the Cullis Cubs – arrived at Doughty’s Codsall home for afternoon tea, prior to watching the FA Cup final there and then moving on to Molineux for dinner at the stylish Sir Jack’s restaurant.

Among those present, in addition to Barron and Kemp, were the likes of Freddie Goodwin, Graham Hawkins, Terry Wharton, John Galley and Clive Ford. Phil Parkes joined them later and there was a collective bated breath as to whether Peter Knowles would show.

Thanks to the wonders of Skype, Vancouver-based Les Wilson spoke to many of his former colleagues in turn and at length before the big game between Chelsea and Liverpool kicked off. So, too, did Laurie Calloway, from Des Moines in Iowa.

But this wasn’t an occasion to celebrate anything they achieved in their handsome first-team careers. It was marking an event from their fledgling years…….the club’s feat of reaching the 1962 FA Youth Cup final.

The take-up of places was almost unanimous, although David Woodfield didn’t make it and Ken Knighton was bitterly disappointed to have to cry off because of family commitments.

Such was the spirit of the group that Kemp flew back early from a stay in Majorca to be here and Goodwin, despite having been in Wolverhampton only five weeks ago, went to the trouble and expense of jumping on a plane from his home in France. Other journeys were hardly a breeze either. Ford lives in Cumbria, Vic Povey in Cornwall and Ray Aggio in Hertfordshire.

In his circular, Doughty – an inside-forward who played in the early rounds of the 1961-62 Youth Cup – wrote: “It is 50 years since the club played Newcastle United in the final and the plan was to meet at five on the fifth day of the fifth month exactly five decades on. Then, bugger it, I heard the FA Cup final was kicking off at 5.15pm, so I propose we convene instead at 3pm. But, hey, after 50 years, what’s a couple of hours between friends?” 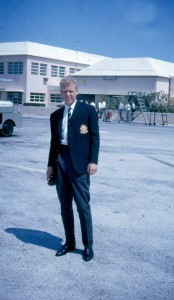 Graham Hawkins during Wolves' trip to the Caribbean in 1964. Today's reunion was opened up to those who came through the system just before and after the 1962 FA Youth Cup final.

Having played a part in the organisation process, notably with finding players now scattered in various parts, we at Wolves Heroes were fortunate enough to be in attendance.

We will be bringing our readers a full account and photographs tomorrow. And talking a little about Peter Knowles……