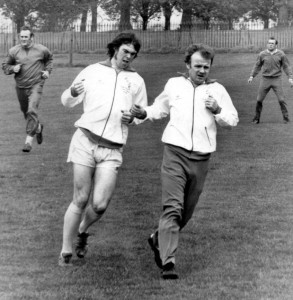 Don Revie and Les Cocker (in the background) put Billy Bremner and David Harvey through their paces in Wolverhampton.

Ordinarily, we wouldn’t be back on line so soon after our weekend postings. But May 8 is no ordinary day in the Wolverhampton Wanderers story.

It was on this date four decades ago, in one of Molineux’s most notorious matches, that Bill McGarry’s side prevailed against a double-chasing Leeds side in front of an enthralled 50,000-plus crowd.

We’ll state from the outset that we have nothing new to add regarding the controversies that surfaced beforehand and exploded into the public domain some time later. The Frank Munro chapter of Peter Lansley’s outstanding Running With Wolves book provides a gripping enough account of what allegedly went on, so we will let sleeping dogs lie on that front.

But the game itself, plus the build-up and aftermath, are subjects that are worthy of a revisit on this 40th anniversary.

On match-day morning, the distinguished football correspondent Geoffrey Green wrote in The Times: “Leeds today stand within an arm’s length of becoming the third side in the 20th century to achieve the double. It may yet prove a long arm because of the existing tensions.”

Green had watched Don Revie’s team win the centenary FA Cup final against Arsenal on the Saturday and thus put themselves in sight of emulating the feat of Arsenal 12 months earlier and Tottenham ten years prior to that.

Preston and Aston Villa had done the double in 1889 and 1897 but the writer reminded his readers that the twin mission had ‘for so long been considered impossible under the pressures of the modern game.’

Leeds stayed over and trained in Wolverhampton before the match and The Times printed a photo of Jack Charlton, Billy Bremner, Norman Hunter and broken-leg victim Terry Cooper relaxing on the Sunday. Munro, among others, believed it wrong that they should have been expected to play two such challenging fixtures in the space of little over 50 hours.

The title race had the potential, like the 2011-12 version, to be settled by goal difference – or goal average as it then was. Derby’s players were already on holiday in Majorca, having finished their fixtures, and led the table from Leeds by one point, with Manchester City third and also at season’s end. Fourth were Liverpool, who could still emerge as champions if Leeds lost at Molineux and they won at Arsenal on the same night.

Wolves, meanwhile, had an eye on another prize, having lost at home the previous week in their home leg of the UEFA Cup final against Tottenham. They had skipper Mike Bailey close to fitness following a long-term hamstring injury but the Yorkshiremen were somewhat more patched up, with Eddie Gray and Wembley match-winner Allan Clarke both having strapping to their thigh and Johnny Giles passing a fitness test shortly before kick-off.

Interest in the match was colossal and the 53,379 crowd – the biggest at the ground since the visit of Manchester United in 1967 – didn’t tell the whole story. Several thousand others got in free when a fence was pushed down.

The exchanges that followed on the field were described by Green as ‘fierce, exciting and nail-biting.’ Five players – Jim McCalliog, Bernard Shaw, Gerry Taylor, Clarke and Hunter – were booked and chances came thick and fast.

Phil Parkes made three excellent saves and John Richards had an effort disallowed as well as missing one reasonable opportunity.

Leeds initially had Bremner up front in place of Mick Jones, who had dislocated his shoulder in the dying moments at Wembley, but the firebrand skipper was quickly switched back to midfield alongside the recalled Mick Bates as Gray was pushed forward.

The breakthrough came when Dave Wagstaffe’s short right-wing corner was crossed diagonally by Shaw and diverted into the danger area by Giles. Munro connected well with his right foot and saw his shot just beat Paul Reaney at the near post.

Mid-way through the second half, Richards and Danny Hegan set up Derek Dougan to steer home the second on the break, only for Leeds to immediately pull one back when Paul Madeley crossed from the left following Giles’s pass and Bremner scooped a clolse-range shot into the roof of the South Bank End net.

Wagstaffe almost decided it with a shot Madeley headed off the line while Bremner fired just over the bar before being denied by Taylor near the line.

Leeds needed only a goal to be crowned champions but couldn’t find it despite a furious late onslaught. Wolves held on to win and, with Liverpool drawing at Highbury, saw to it that a new name went on the League Championship trophy in the same weekend that ‘Leeds United’ had been engraved on to the FA Cup for the first time. 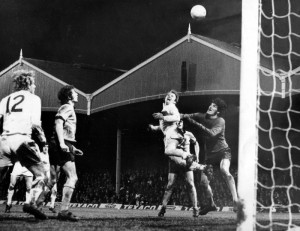 Bremner goes close to the late equaliser that would have taken the title to Elland Road.

The mother of all parties kicked off in Majorca, to where Brian Clough sent a telegram of congratulations from his family holiday in the Scilly Isles. It wasn’t the last time he was to have reason to thank Wolves.

Revie, his bitter rival, was dejected. “Winning the FA Cup doesn’t soften the blow but I’m very proud of my team,” he said. “I don’t know where they got their energy from.”

Wolves were no great fans of the Leeds ways but their older supporters could imagine what the visitors’ heartbreak felt like. Their own side had missed the double by a point 12 years earlier.