The Life Of Riley

Spirit Intact Despite The Misfortune

I wonder how uncertain some of the younger players are feeling now at Molineux. Different managers come with different ideals, different opinions and there is a narrow window of opportunity in which to make an impression on a new gaffer. But imagine how hard that must be if you are on the injured list.

That is what happened to Grenville Riley when the (for some) notorious Bill McGarry took the Wolves reins from Ronnie Allen in 1968. Yet, as we shall see, that ailment paled into insignificance when judged against the nightmare that Riley had to face in later decades; a traumatic experience that puts life into perspective.

Grenville Riley was born in December, 1950, at the Rosemary Ednam Hospital in Sedgley. The family home was by the canal in Tipton. As a youngster, he would be taken with his friend Jimmy Britain to Molineux, where they would stand on the South Bank.

“We would catch the train from Owen Street,” he said. “I remember one game played in the fog and we could just make out the pitch from the back of the terrace.  My heroes were the likes of Peter Broadbent, Terry Wharton and Alan Hinton.

“I went to Tipton Grammar (now Alexandra High) and played for the school teams at the various ages.  At under-13, we played Ounsdale from Wombourne, who were the Manchester United of the local school scene, and I scored twice in a 2-2 draw in a cup final, so we each had the trophy for six months.

“I was selected to play for Brierley Hill, Sedgley and Tipton area, then Staffordshire Boys and Birmingham District. I got to the last North v South international trial and then England versus The Rest.

“Our team’s front three were me, Charlie George and Bob Latchford. But when it came to the final England team selection, a lad called Steve Wilkinson from Stoke got in. He had played on the wing for Staffordshire but couldn’t get into the Birmingham district side. The chief selector was the football head of Stoke schools.”

Grenville Riley, though, had caught the eye of Wolves.  An offer was made and the youngster left school for Molineux in September, 1965.

“I had visited Manchester United and Spurs and my best friend’s dad was brother-in-law to Jimmy Dugdale and a scout for West Brom. They did everything they could to get me to the Baggies but my mind was made up. Also, my dad went to a reserve game at Wolves and came back with a brown envelope, so that clinched it.

“I was a centre-forward when I signed but, as I went through into the reserve team, I became more of a midfield player in a 4-2-4 set-up, alongside the likes of Frank Munro.  When Ronnie Allen was manager, things were going well for me. Gerry Summers and Ron Bradley were the coaches and I know Ron felt I could play.

“I remember one Central League game against the Villa. Most of the Wolves side were first-teamers but I scored with a great header in a 2-2 draw. I was man of the match, in a team with guys like Peter Knowles and Alun Evans, and thought I might have a chance to get into the first team on the Saturday.  When the teams went up on the Friday, I was in the third team!

“When I joined as an apprentice, it was for £4 7s 6d and, on Mondays, we had to sweep the South Bank terrace.  Jack Dowen was in charge of the apprentices and liked me, so he gave me the job of cleaning out the boardroom drinks cabinet. 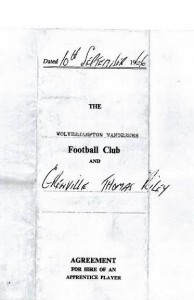 “There used to be a shed underneath the old Waterloo Road stand where the drinks were stored – the other lads popped round one at a time for refreshments! I had great times at the Wolves – even cleaning the boots, especially Ernie Hunt’s. He was size 8 like me and I used to wear his second or third pair whenever I could. My closest friend was the full-back Roger Grice, also from Tipton.

“You would sign full-time pro at 18 or even 17 if they really thought you could play. I signed a week after my 17th birthday for £15 a week, plus bonuses. I still have the contract. It shows the bonus structure right through to what we would get if we won the European Cup.

“My biggest claim to fame at Wolves was scoring the winner in double extra-time in the Staffordshire Senior Cup final at Tamworth. It was Grand National Day – the year Foinavon won. I had it in the sweep on the coach. I remember taking a corner and the fans were all listening on the radio. I asked who had won but they said they didn’t know ‘cos most of the horses had fallen.

“In all, I must have played 70 or 80 times for the second team after making my debut as a 16-year-old.  But fate took a hand. Ronnie Allen got the sack and, on Bill McGarry’s first day, we were to play Stoke City in an FA Youth Cup game.

“We went to Castlecroft on the morning of the match for a light work-out. I went to the byline and put over a left-foot cross. As I turned to see where it was headed, Ron Bradley charged in to block and my head connected with his knee. My cheekbone was broken and my right eye closed. I was the first player McGarry saw as he came down the corridor and into the physio’s room and I was only half conscious on the table. When I got back six weeks later, I turned my ankle and hardly played before he chose to give me a free transfer at the end of the season.”

Derek Dougan was no McGarry devotee and took the young Riley to one side. “He told me to do nothing until I heard from him. Meanwhile, I had offers from South Africa and Australia, as well as lower-division clubs in the Football League.

“I fancied traveling but perhaps not too far, so I accepted an offer from Sligo Rovers in Ireland. Just after I signed, The Doog came through and told me that his friend Noel Cantwell was offering me six months with Coventry City. Too late.

“I was terribly homesick after two weeks but met Gertrude, who would become my wife. I stayed in Ireland for four months, got nowhere and decided to give up football. I joined my friends in the betting industry back in the Midlands. I ran a betting shop in Carter’s Green, West Bromwich, and became great friends with the likes of Jeff Astle, Len Cantello, Bobby Hope, Tony Brown and Asa Hartford, who would come into the shop.

“I lost touch with the Wolves and never went near Molineux for 25 years. I would be busiest on Saturday afternoons and sometimes would go to The Hawthorns when Jeff Astle gave me tickets.

“I only went back to Molineux when my son, also Grenville, urged me to go for the Honved game when the new ground was formally opened. Then we were there for a 2-0 win over the Baggies and I had got the bug!  We are now fervent fans and I have to give lot of credit to Mick McCarthy for what he achieved.

“Work-wise, I progressed from the shops to the racecourses and dog tracks. I would bump into Ronnie Allen and Jack Dowen at Wolverhampton Races and they always harped on about how unlucky I had been. In fact, I could not have been any happier.

“When satellite racing took over from Extel in 1987, I coordinated the first day of Satellite Information Services from Chester. I was at the top of the tree and had the offer to return to Ireland to head the show there. The job took me to Belgium and, after just two days, I was the front-seat passenger in a head-on smash in Brussels. It ripped my ankle apart and dislocated my hip, which pinched my bowel.

“I knew something was seriously wrong but the doctors were reluctant to do anything.  I was in intensive care for a week and then insisted on going back to England.  I came back on a scheduled flight in first-class with the drip over the luggage rack and with an interpreter who had forgotten his passport. He was kept on the plane while I was put into an ambulance on the tarmac.

“I was supposed to go to the BUPA hospital at Little Aston but insisted on going to Sandwell General.  I was put on traction in intensive care and, within a couple of hours, my stomach had blown up like a balloon.  They operated and found my bowel was full of gangrene.  I had acute renal failure and peritonitis. Had I gone to Little Aston where there was no intensive care, I am not sure I would have survived.”

Happily, Grenville Riley’s bowel could be restored but it was slow progress and, after returning to the job he dearly loved for two years, he finally had to take retirement on disability following major surgery on his ankle and foot.  So now he has more time to watch the Wolves, where he goes with daughter Kathleen (“married to a West Brom season ticket holder – it is possible”) and son Grenville.

“Grenville loved to play in charity matches at Molineux and scored six once.  That’s more than Bully ever got in one game! We have four beautiful granddaughters and I am so proud of all my family. 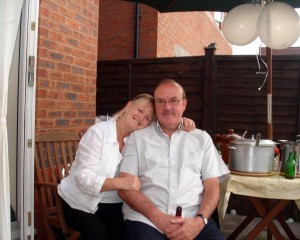 Grenville Riley, now in his early 60s, and his wife Gertrude.

“I do not regret for one minute that I didn’t make it at Wolves. When I think of the earning potential there was, it would have made me skint now. I would bump into Norman Deeley in the bookies at Wednesbury. He used to wear the same old trainers and only really went there for the company.  I’d give him a couple of quid for a bet. What a legacy – compare that to what players get today.

“My wife is a Jehovah’s Witness and I often talk to Peter Knowles. Perhaps he is the ideal man to talk to about luck. I got a cheque a while back for £300 after tidying up some PFA pensions and, when I told him he was then able to get £200, he was over the moon. Does that tell you something?

“As for me, I could not imagine being any happier if I had scored the winning goal in a World Cup final.”