Stars Were Rising In The East

Quartet Who Hurt Wolves – And Then Joined Them 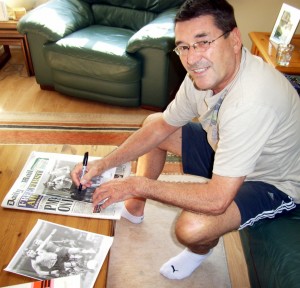 Derek Jefferson.....engaged in a a different kind of signing.

When Wolves lost at Ipswich on the opening day of the 1968-69 season, it was a peep into the future as far as those at Molineux were concerned.

And not just because the newly-promoted East Anglians had Bill McGarry and Sammy Chung heading up their managerial team.

Also bedded in at Portman Road were mercurial midfielder Danny Hegan and Derek Jefferson, the hard-man defender who, in 1972, followed his three former Suffolk colleagues to the West Midlands to link up with them again.

Jefferson broke through and became established in the Ipswich team in the 1967-68 season in which they pipped QPR to the Second Division title by a single point, with Blackpool narrowly missing out in those pre-play-off days in third place.

“It was good timing for me because I was just finding my feet,” he said. “I had been signed in 1966 by Jackie Milburn, who came and knocked on the door of my parents’ house in the north-east saying he wanted me.

“He was Ipswich’s manager when I joined them but was replaced soon after by Bill, who I got on well with. He didn’t stand any messing about, even in his early days there, but must have liked me as he then took me to Wolves.

“Ray Crawford, who had had a decent enough spell at Wolves earlier in the 1960s, was also at Ipswich with us and was a terrific goalscorer. He was brilliant for the club, an absolute legend. And Danny was a real talent, as everyone knows.”

Crawford remains Ipswich’s all-time leading scorer with 227 goals in 353 games across two spells and actually played his final game for them in a 1-1 draw in the return at Molineux in March, 1969.

By then, of course, the Wolves board had got their man, having made a more successful swoop for McGarry than when they tried to lure him as a permanent successor to Stan Cullis in 1965. 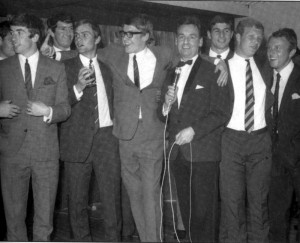 Jefferson, looking not unlike John Major, whoops it up with his Ipswich pals in May, 1968. On the left is Danny Hegan.

Jefferson is easily identifiable on a number of Ipswich celebration photos from the end of 1967-68. He wore horn-rimmed glasses!

“I was short-sighted from the age of 13 and never felt as comfortable under floodlights,” he added.

Now 63 and living near Solihull, he played only 52 games across four years at Wolves before moving on to Boston and Washington, then Sheffield Wednesday (on loan) and Hereford.