No shortage of material for our monthly diary feature this time, with a nostalgic get-together, interview opportunities and meetings aplenty along the way….. 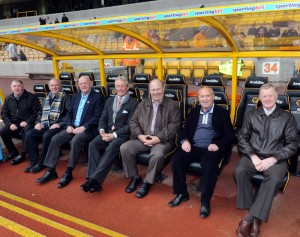 Wednesday, April 25: Having recently traced Terry Thompson through the Notts County Former Players Association, today got Gordon Roberts on board for the ‘Last of the Cullis Cubs’ reunion a week on Saturday. A letter to the South Wales Echo in Cardiff, where we knew him to be from, brought half a dozen positive responses and we eventually traced him – to Kidderminster!

Friday, April 27: Sponsored Wolves’ official photographer Sam Bagnall today on his punishing Wolverhampton-to-Swansea cycle ride in aid of Brain Tumour UK (http://www.justgiving.com/sambagnallphoto). By coincidence, on the same day, I heard of the death at the age of 84 of Johnnie Johnson, the long-time Express & Star ‘snapper’ at Wolves games. He covered the 1974 and 1980 League Cup finals, as well as three royal weddings and countless big news stories. He moved from his native south-east so he could work near his beloved Molineux and saw the funny side when one of his last Wolves assignments took him in the late 1980s to a game at Aldershot, very close to his roots.

Tuesday, May 1: Met Terry Wharton and his wife Sue in the rain outside Asda next to Molineux. Said we’d chat properly at the get-together at the weekend.

Saturday, May 5: Had Freddie Goodwin and his wife Wendy round for coffee en route for the reunion party, which started at John Doughty’s house in Codsall before moving on to Molineux. Can’t believe that I’d been chasing Freddie for years and have now met him three or four times, in different locations, in a month and a half.

Tuesday, May 8: Peter Knowles, who stole the show by turning up unexpectedly at Molineux on Saturday night, made another surprise appearance today. He was at John Doughty’s house to present him with a signed, framed picture of he and his brother Cyril from a Wolves v Spurs match. He, in turn, was presented with various photos and match reports from youth games in the early 1960s and apparently said he wouldn’t have missed the reunion for the world.

Sunday, May 13: Dropped in to see Joe Gallagher on our way home from seeing friends near Solihull – and found him his normal friendly self. I’ve emailed him copies of some original photos he happily signed in our presence for www.midlandsmemorabilia.com 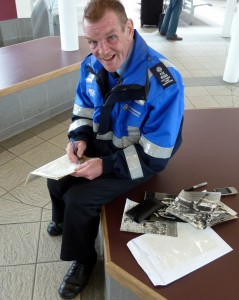 Monday, May 14: Straight after the Birmingham v Blackpool play-off semi-final second leg last week, I interviewed Paul Ince’s son Thomas outside the dressing room. Tonight, again for the Wembley programmes the week after next, I did a long piece at Sheffield United with Neill Collins, whose (brief) climb to the Premier League with Wolves was one of three promotions he has won in his career. A fourth now beckons.

Wednesday, May 16: Called in to see Hugh Curran at his workplace in Oxford en route for the Southend v Crewe play-off game and had an email around the same time saying that a former Wolves favourite had been addressed by the world’s most powerful man. Yes, Robbie Keane (and his Los Angeles Galaxy team-mates) have been meeting the President, Barack Obama, at the White House in Washington.