Shaw Not Ready For Easy Life 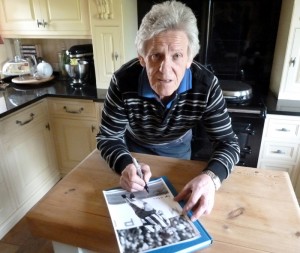 A job in the kitchen for Bernard Shaw.

Bernard Shaw hasn’t been to a football match for over 20 years and reckons he hasn’t spoken since well before that to any of the team-mates with whom he shared a dressing room in his 156-match Molineux career.

But his life has moved on busily in other directions in the subsequent decades and his was certainly a clean break from the game.

It’s not only this website that has had trouble locating him and I sensed an initial gruffness when we finally met, by arrangement with his family a few hours earlier, on his drive late one Friday afternoon this spring.

Early mentions of Wolves didn’t appear to be cutting much ice, so how about the livelihood he has pursued in property and building since spending three decades running a pub in North Derbyshire?

“I can’t remember the last time I talked to any of the lads from Wolves,” he said. “I took the pub on here in 1977, the year I finished in professional football, and you can easily find yourself working 18 hours a day in that trade in good times. I didn’t plan to come out of it but we had a good offer five years ago and the new chap has now converted it into a bistro.”

We chatted in the pleasant sunshine and then moved inside. As the weather cooled, Bernard slowly warmed up.

“When I get involved in something, I really put my mind to it and think I would be bothering people by getting in touch and asking about them,” he added.

“I still see some of the lads I knew from Sheffield United like Len Badger, Geoff Salmons, Billy Dearden and Tony Currie. Being in the same area means I have some contact with them. And I watch football on TV. It’s not that I’m not interested.”

Shaw is 67, having been born in the final few weeks of the Second World War, and is still going very strong. He doesn’t give the slightest impression of a man looking to ease up.

“We have a few building jobs going on,” he added. “I don’t employ men full time but we have just finished an extension and renovation in Sheffield and have got a project for 25 flats in the city.

“I’m involved in it with one of my sons, Matthew, and I’ve just bought the place next door, which is joined to our cottage and is also hundreds of years old. Doing that up will be another project soon. We already own a few properties.

“It all goes back to my time at Wolves….I didn’t like playing golf and used to go in the afternoon and on days off to help some local lads who were bricklayers. But I took the Prince of Wales on a few years later because I thought I was too thick to do anything else!”

Home is in walking country on a hill leading out of Baslow – a village close to the Chatsworth Estate, between Bakewell and Sheffield. It’s a different world to the industrial Black Country he knew and some explanation perhaps as to why he hadn’t caught up with the news that John Richards, one of his long-time club colleagues, is no longer Wolves’ managing director. 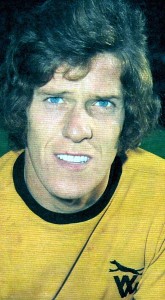 Football....yes! But golf? Forget it.

The Shaw name is synonymous with Sheffield United, where he launched his career with 153 first-team appearances, the first of them against Leyton Orient in 1963.

His much older brother Graham, also a full-back, played almost 500 games for the Blades and had Billy Wright, Bill Slater, Ron Flowers and Peter Broadbent for company at different times in an England career that brought him five senior caps from 1958 to 1962. Joe Shaw, the club’s all-time record appearance maker and a man immortalised by a statue outside Bramall Lane, is no relation.

“Graham died about 14 years ago in his mid-60s,” Bernard said. “I still have his car here, although I hardly drive it.

“He played all his life as a left-back but was right-footed. To a large extent, the same thing happened to Derek Parkin at Wolves.

“I had most of my United games at left-back but was used mainly on the right by Bill McGarry. I was delighted when he came in for me because I wasn’t happy at Bramall Lane after Arthur Rowley took over from John Harris.

“I had grown up with Len Badger and we played together for England youths and under-23s as well as the club. We played in the England side who won a 1963 international youth tournament that was known as the Mini World Cup. It was played in this country and we beat Northern Ireland 4-0 in the final at Wembley.”

Shaw overlooked or had forgotten the fact that the side were captained by Ron Harris, adding: “There was talk of us being groomed together for the World Cup itself three years later and Jon Sammels, John Sissons, Lew Chatterley and Tommy Smith were around. But a lot of the others didn’t make it.”

The player won his only two England under-23 caps in May, 1968 – against Italy in Trieste and Hungary in Budapest – before moving to Molineux for a bargain £15,000 the following summer.

His League debut for the club came in a League Cup win at Brighton, his first League outing following shortly afterwards against his old city rivals, Sheffield Wednesday.

Initially, he struggled to hold down a place as Parkin’s partner amid competition from Gerry Taylor and Les Wilson. But he played almost 50 games in 1970-71 and over 50 the season after, including all but two in a UEFA Cup run that culminated in an odd-goal defeat against Tottenham in the final.

“I had been in digs in Penn when I first moved down there and remember Hugh Curran living in Bantock Gardens,” he added. “How is Hughie?

“I got married while I was with Wolves and our two sons were born there, one of them in a wooden hut at RAF Cosford that served as the maternity unit.

“They are both still Wolves fans and the last time I went to the ground was to show them it while they were still maybe five and six. They’re around 40 now, so that shows how long ago it was. Phil Shaw (the club’s late former secretary) was working there and let us in.

“We moved to Redhouse Road in Tettenhall and Bill McGarry lived nearby. As a side, we were reasonably successful without quite managing to win any of the big honours and I was happy enough.

With Geoff Palmer emerging, Shaw played only one Wolves match after figuring in the 1973 FA Cup semi-final against Leeds – a 4-2 home win over Everton in which Richards scored his second hat-trick. 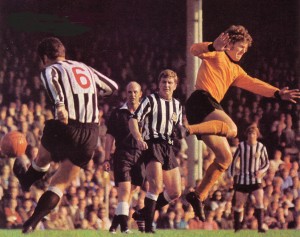 In action against Newcastle at Molineux in 1970.

The full-back soon found himself back on familiar territory by joining Wednesday, where he topped the 100-game mark with a third club.

But the Owls, with whom he was a team-mate of John Holsgrove’s, were in the Third Division by the time he left them in 1976 to embark on a non-League career, first with Worksop, then Baslow.

* England had Peter Knowles, Harry Redknapp, John Hollins, Howard Kendall and John Sissons in their side when they retained the Mini World Cup in Holland in 1964. In the beaten Northern Ireland team the year before were Pat Jennings (then of Newry) and Wolves youngster Dave Clements.