Wilshaw Goals Not Sufficient To Spare Him The Axe 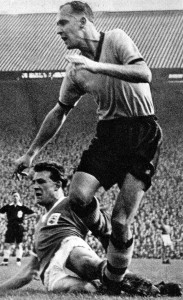 Dennis Wilshaw is challenged by Birmingham's Trevor Smith at Molineux.

There is a feeling that Peter Crouch might have been hard done by with his exclusion from Roy Hodgson’s 23-man England squad.

But the beanpole Stoke striker’s admirable record of 22 goals in 42 international appearances does not compare with the ratio of a Wolves legend who had to be content with barely a quarter of those caps.

As the national team embark on a new era in Oslo tonight, we reflect on Dennis Wilshaw ‘s brief but prolific career with the three lions – and how life with his country began for him just as life had with his club.

The forward’s debut came against Wales in front of more than 60,000 at Cardiff’s Ninian Park in October, 1953 in a Home Championship game that helped sort out the qualifiers for the following summer’s World Cup.

He marked the occasion by scoring twice in a 4-1 victory – as did Nat Lofthouse – but his reward was to be left out when Stanley Matthews and Stan Mortensen returned for the Wembley clash with the Rest of the World a week and a half later.

Wilshaw, who had had Billy Wright and Jimmy Mullen as international team-mates at a time when he had scored 11 goals in 12 Wolves appearances at the start of 1953-54, had to wait eight months for his second England outing.

That, too, was marked with a goal – Mullen also netted in the 2-0 World Cup win over hosts Switzerland in Berne – as Bill McGarry, as well as Wright, took his place in the side.

It was the Molineux inside-forward’s only goal of the tournament but he memorably hit four against Scotland the following spring, bagged a brace against Northern Ireland a few months after that and was among the scorers in a big win in Finland.

That added up to ten goals in only 12 international appearances – an outstanding return but not good enough, in the eyes of the selectors, to earn him an extended run in the team.

With Wolves, Wilshaw had been blooded for the first time at home to title-chasing Newcastle on March 12, 1949, six months after he had returned to the club from a loan spell at Walsall.

Johnny Hancocks and Mullen were both out injured and the newcomer took full advantage of his opportunity. It was 0-0 at the interval but, in a second half that was broadcast live on BBC, Wilshaw opened the scoring by capitalising on a mix-up and smashing  a shot in off the bar. He doubled the lead in the 67th following Les Smith’s cross and beat the advancing Jack Fairbrother to complete his hat-trick three minutes later.

He then hit the post in the last minute, only for Stan Cullis to leave him out of the next two games – goalless draws at Burnley and Liverpool. 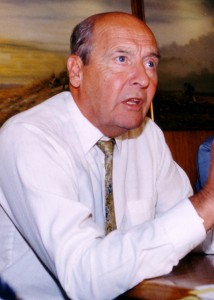 The popular forward in his later years. He died in 2004.

And, despite scoring ten times in only 11 Wolves matches during his breakthrough season, he also narrowly missed out on a place in the club’s triumphant line-up in the 1949 FA Cup final, Jesse Pye being recalled after injury and leading the way to victory over Leicester with a couple of goals.

Wilshaw’s tally of ten England goals leaves him level in the all-time list with the likes of Allan Clarke, Francis Lee, Paul Gascoigne, Jackie Milburn and Ron Flowers, the latter of whom was a trusted penalty taker for his country.

His overall Wolves total was 117 goals in only 232 League and FA Cup games.