Kissing Goodbye To A Netful Of Goals

300 Reasons (Give Or Take) Why Wolves Boobed! 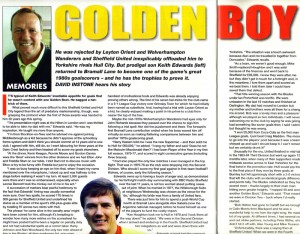 Good strikers had virtually been a ‘given’ at Wolves’ for decades. But, around the time they won the League Cup for the first time, they made a decision that was to come back and haunt them.

Bill McGarry had John Richards and an admittedly ageing Derek Dougan in harness at Wembley in 1974, with the likes of Peter Withe and Steve Kindon pushing for a way in.

There is one other forward, though, who the club had at their fingertips and allowed to slip away. He is not widely known to have had connections with Molineux but, boy, did he go on to prove himself!

His first goal in League football even came against Wolves in 1976 and he went on to win no fewer than three Golden Boots for finishing as top scorer in the division he was playing in.

The fact that most of his plundering was done in the first half of the 1980s makes his Molineux case, retrospectively, even more powerful.

Wolves’ joint leading marksmen in 1981-82 were Andy Gray and Mel Eves with seven. Two seasons later, Wayne Clarke was top dog with nine, including three in the cups. Alan Ainscow’s six led the way in 1984-85.

So who is the goal machine who escaped the net? Answer: Keith Edwards, an absolute legend at Sheffield United and a highly popular figure as well at Hull City.

Wolves Heroes’ David Instone was recently despatched to Yorkshire to interview him at length for the newly-published issue 23 of Backpass and was surprised to stumble on a Molineux angle.

“Wolves did have me down there for a while but nothing came of it,” said the 54-year-old north-easterner. “I had to be a bit patient to get a start in the professional game.

“Orient offered me a trial and I went down there because my father was living in London but the manager Gordon Petchey advised me to stay in the north.

“Then Wolves gave me a trial and I was there for two weeks with Gerry Forrest, a right-back who lived three doors away from me in Teesside.

“I was rejected after a few days but stayed because Gerry was still there. I remember seeing John Richards, Dave Wagstaffe, Kenny Hibbitt and Derek Dougan and I watched a first-team game there but was a bit disheartened by then.

“Sammy Chung was around and I wouldn’t necessarily put my rejection down to Bill McGarry. Because the trials weren’t very positive, I’ve largely forgotten about them.”

Edwards was subsequently snapped up at Bramall Lane, where he and Chico Hamilton netted the goals in an early-season 2-2 draw with Wolves in 1976-77, only four months after the two clubs had been relegated from the top flight together.

In two spells with the Blades, he scored an amazing 170 times in only 309 games. With Hull, also across two stints, he hit 97 in not much more than 200 matches.

He also managed a few goals for Leeds, Aberdeen, Stockport, Huddersfield and Plymouth and is likely to be back at Molineux next season in his role as a forthright pundit for BBC Radio Sheffield. We should say very forthright. 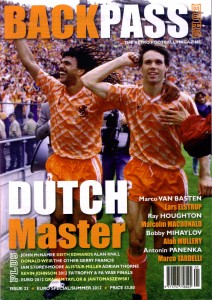 “I was scoring a million but they weren’t bright enough to spot talent,” he adds of the clubs who didn’t follow up their interest in him.

“I was hugely disappointed not to get an apprenticeship and proved my point over the years. The fact I stayed in the game so long and won three Golden Boot awards proves they were wrong.”

* The latest issue of Backpass also carries an article about the recent reunion of Wolves’ 1962 FA Youth Cup squad, some Euro 2012 pointers from Graham Taylor and a picture and mention of the Reverend Kenneth Hunt. More details are available by clicking on the icon in the ads area on the right.

* The name Gerry Forrest may also be familiar. He played 115 top-flight games for Southampton and 391 in the lower divisions for Rotherham, also having a coaching career that included duty as Darlington’s caretaker manager in 1993.