Sinton On His Late Euros Call

Replacements Were Commonplace Even Then 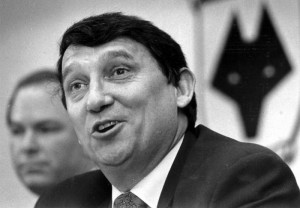 When is it safe for a footballer to take his holidays at the end of a season? Or to tie the knot for that matter?

A month ago, few would have thought John Ruddy would be fretting over his wedding because of a call to arms from England for Euro 12.

And you would have got long odds around the same time on Liverpool defender Martin Kelly being asked to board the plane to Poland and Ukraine; even more so on Jack Butland (the replacement for the now injured Ruddy).

For the likes of Kelly, Butland and Jordan Henderson in 2012, though, read Andy Sinton in 1992.

The dependable former Wolves man was sitting at home with his feet up 20 years ago this week when his close-season peace was shattered by a summons to Scandinavia.

“I was on stand-by for the European Championships finals in Sweden and remember watching bits of football on television in the meantime,” he said today.

“Then I was called in by BBC TV to do some summarising from the studio for England’s last warm-up game, which was against Finland in Helsinki.

“John Barnes suffered a nasty injury there and was ruled out of the tournament. Straightaway, I was putting two and two together and when Graham Taylor was interviewed afterwards, he said something like: ‘Andy Sinton, it’s time you got your bags packed.’

“The squad came back to England for a few days but I was with them when they reported to Luton and then flew out to Sweden. It was a hectic time all round because our eldest son was born a couple of days before.”

The selection of Sinton as a late replacement was no bolt from the blue.  Then a 26-year-old with QPR, he was well enough in the frame to have played in the final pre-Euros home friendly – a fortunate Wembley draw with Brazil. 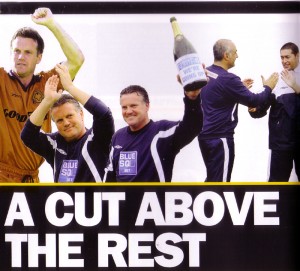 Andy Sinton as portrayed last year in the programme at AFC Telford, where he is manager.

Seven years before becoming a dependable left-winger with Wolves, he was also clearly in his utility-man phase. In the Championships, he played at right-wing-back as England’s second group game ended in a dreary deadlock against France in Malmo, then he figured wide on the left against Sweden in the next match.

Wolves Heroes will be continuing a Euros theme over the coming days by looking closely at the ‘Wolves’ element of that 1992 campaign in Sweden. Not that we knew it at the time.

* Sinton already knew what surprise call-ups were all about. He made his debut aged 16 years 228 days in Cambridge United’s 2-1 win at home to a promotion-bound Wolves in November, 1982. He is the youngest player ever to play a League game for Cambridge and, not surprisingly, is the only product of their youth team to become a full England international.