Evans Eyes Back On Donetsk 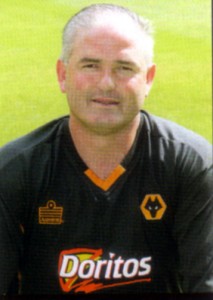 Chris Evans during a Molineux stay of almost two decades.

England’s big Euro 12 kick-off in Donetsk tomorrow will have special resonance to a long-serving former member of Wolves’ coaching and managerial staff.

Seven years ago, Chris Evans spent nearly a week in the eastern Ukraine city while being interviewed for a position that would have increased his salary four or five times.

He subsequently pulled out of the race for the job at Shakhtar Donetsk but will be an interested spectator at his home near Wolverhampton for the Group D opener against France.

“I have only happy memories of my few days over there and will be particularly interested to see the Donbass Stadium on TV,” he said. “I stayed in the same hotel as the architect, who was from Cape Town, and they were just at the planning stage with the new ground.

“I recall thinking it looked a bit like a spaceship and it doesn’t surprise me that they have built such a spectacular venue. Money’s no object there.

“The Shakhtar owner, Rinat Akhmetov, has invested in them like Roman Abramovich has at Chelsea and I think it’s only a matter of time before they win the Champions League.”

Away from the public gaze, Evans slipped away from Compton and Molineux in the autumn of 2005 after being recommended by an FA source and head-hunted by a company who interviewed him in England. Shakhtar were seeking a director of football to oversee development from Academy level right through to the first team and when the process moved on to the old Eastern bloc, an astonishing welcome awaited the Wolves Academy chief. 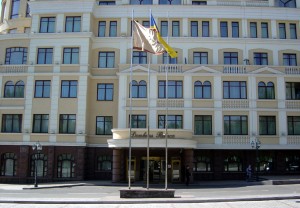 The ultimate in luxury. Please try clicking on images to enlarge them.

“I landed first in Kiev and was staggered to learn that a limousine was waiting at the foot of the aircraft steps, so I didn’t have to go through the proper customs,” Evans added. “Then I flew on to Donetsk and had another limo waiting for me when I disembarked there.

“The hotel they took me to, the Donbass Palace, was the best I’ve ever seen and, from the second I arrived in the city to the second I left, I had two interpreters with me.

“I met Mr Akhmetov at the hotel but the interviews were done by other club officials and I spent a lot of time with the chief executive. They were very keen to show me everything, especially the training ground, which covered 125 acres and was like nothing I’ve ever seen in my life.

“As well as pitches that were like billiard tables, with groundsmen running on pushing wheelbarrows to repair any little divots, the players had sleeping quarters, barbecue areas and even a 25-acre lake where they could relax by fishing and taking out rowing boats. 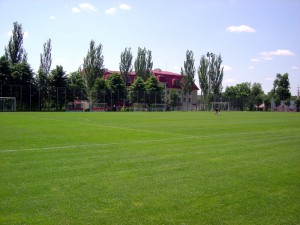 Training facilities that are second to none.

“I was doing one of my coaching badges at the time and had to make a presentation at Warwick University to a room that contained men like Bryan Robson, Sam Allardyce and Steve McClaren. It was also the course on which I got to know Gary Megson for the first time. I took over 200 pictures and Steve said afterwards that the Shakhtar facilities looked better than anything he had known despite travelling the world with Manchester United and England.”

Evans’ stay in a city of almost a million inhabitants had two familiar aspects. They play in colours very similar to Wolves and a photo of Isaac Okoronkwo, the Nigerian defender brought to Molineux from Shakhtar in 2003, adorns one of their walls.

And there’s a very cosmopolitan feel to a club who have beaten Dynamo Kiev to the Ukrainian championship seven times in the last 11 seasons as well as lifting the UEFA Cup in 2009 and the domestic cup in three of the last five years.

At times, they have had half the Brazilian national team in their ranks and have been managed since 2004 by the Romanian Mircea Lucescu. But there were down-sides to Evans’s potential appointment.

“The city, which was quite near the Black Sea, was a contrast,” he recalls. “Two-thirds of it was Eastern bloc but the other third was phenomenally modern with Gucci shops and affluent inhabitants.

“They have incredibly cold winters, though, as well as some of the very high summer temperatures we’re hearing about now, and it wasn’t the nicest of areas. I had done my homework before I went and discovered that the city was basically created in the 1860s on coal mines and a steel plant by a Welshman called John Hughes. The old stadium, which was the one I saw, was overlooked by slag hills and fans who couldn’t afford to go to games used to stand on the top of those for a free view.

“Although I had promised Jez Moxey that I wouldn’t make a decision while I was there, I formed the impression that, if I had pressed the button, the job might well have been mine.

“But I made my mind up that I couldn’t interrupt our sons’ education here. If we had all moved over, I think they would have ended up having to go to school or university in Kiev.

“There isn’t a big ex-pat community over there and the area has a troubled past. They hadn’t that long put the kalashnikovs away and I understand the previous owner of the club had been killed in a car bomb attack at the stadium.

“The club have deep enough pockets to amass the best players in the world. That’s why I think they will win the Champions League. Top players will go there because of the money and the facilities.

The 52,000-seat Donbass Arena in which England play tomorrow.

“I do sometimes wonder what might have happened if I’d gone but money isn’t my God. My family are far more important to me.

“But the way I was received and the facilities leave me very grateful for having been approached by them. It was such an experience.”

* Chris Evans, currently out of work after leaving Sheffield Wednesday this spring, was a proud man today when two Wolves Academy graduates (Robbie Keane and Keith Andrews) were due to be named alongside Kevin Doyle and Stephen Ward in the Republic of Ireland side for their Euro clash with Croatia.