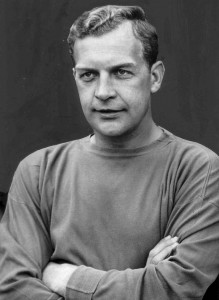 Nigel Sims and Malcolm Finlayson had more in common than their roles, at different times, as rivals to the great Bert Williams at Wolves.

They also remained two of the Football League’s best uncapped goalkeepers and so missed out on any flirtation with the World Cup or what was then known as the European Nations Cup.

Finlayson, a double title winner and FA Cup final victor while at Molineux, played in an era when the Scottish selectors tended to snub ‘Anglos’ – those from their country who chose to join clubs on this side of the border.

Sims had to be content with an England B cap, selection for the Football League representative side and, prior to that, an appearance for Young England against the seniors on the eve of the Cup Final. But he nevertheless did some highly unusual touring just over a year before the first Nations Cup was contested by a mere four teams over only five days in France in July, 1960.

The long-time but little-used Molineux understudy (he made just 39 League and Cup outings for Wolves in eight years) had moved on to Aston Villa and beaten Finlayson to the honour of becoming a Cup winner by the time he received his surprise call to the Continent in the summer of 1959.

Villa’s manager Joe Mercer was a close friend of his Highbury counterpart George Swindin and had indeed been his skipper when Arsenal beat Liverpool in the 1950 FA Cup final.

Swindin had been a keeper himself in his earlier years but found himself short of one for the Gunners’ three-match end-of-season trip to Italy and Switzerland in the year Wolves retained their League Championship crown.

Jack Kelsey was nursing a broken arm, second choice Jim Standen had a back strain and third-in-line Peter Goy was unable to travel as he was doing his National Service. It was time to send for Sims, who was at home contemplating Second Division football after Villa had been relegated for only the second time in their history.

The catalogue of selection problems prompted the authorities to approve the signing of a loan player to guest for them, so the 27-year-old from near Burton-on-Trent hurriedly packed his bags and met his new team-mates in London.

The story is told in full in a new biography of the keeper that is officially launched this coming weekend. And, in it, Sims says: “I had things I needed to do which you can only sort out in the close season but I didn’t really have a choice.

“It was a sheer pleasure going to play in a lovely setting like Italy, testing yourself against some of the greatest players in the world.”

Arsenal’s first opponents were Juventus in Turin, where they found themselves up against a certain ‘Il Gigante Buono’ – the Gentle Giant, John Charles, who acted as a go-between when Wolves visited the same city in the UEFA Cup quarter-final in 1972.

“Playing against Big John was an experience,” Sims added. “He was phenomenal in the air, as good as it got.  He took no prisoners and you certainly knew you had been in a game but he was fair and a true gentleman.  I don’t think he got cautioned in his entire career.”

Arsenal lost 3-1 to Juventus, their only goal coming from Charles’ younger brother Mel Charles, but a visiting side who included Tommy Docherty and Jackie Henderson had more luck in their other two games.

Sims was again included for the 2-1 victory against Fiorentina but he, too, picked up an injury in the process and missed the last match of the tour – against Lugano in Switzerland.

Swindin turned from naming a stand-in to naming Standen, the future West Ham hero and Worcestershire fast bowler recovering sufficiently to return for a 4-1 win in which Henderson – having had a three-goals-in-nine-games stay with Wolves not long before – scored his second tour goal.

Opportunity never knocked for Sims at full international level but other doors might well have opened. He is known to have impressed Juve scouts on this 1959 visit and subsequently attracted a mouth-watering £60,000 bid from Highbury that, no matter how friendly the relationship between the two managers, was rejected.

Instead, he would face Wolves in an FA Cup semi-final at The Hawthorns the following spring, when Finlayson was in the opposite goal. 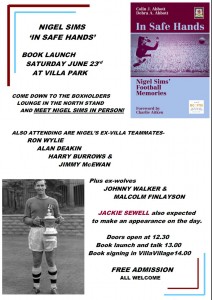 The two men, plus post-War Wolves forward Johnny Walker, are due at the launch this Saturday of  ‘In Safe Hands – The Memories of Nigel Sims’ by Debra A and Colin J Abbott. Also expected to be in attendance from 1pm in the boxholders lounge of Villa Park’s North Stand, where admission is free, are ex-Villa players Harry Burrows, Alan Deakin, Ron Wylie, Jimmy McEwan and Jackie Sewell.

The 256-page hardback, by ABZ Publications, retails at £16.95. Fifty-seven copies will be available as part of a deluxe package (priced at £60) that comes complete with a replica 1957 Aston Villa Cup Final shirt signed and dedicated by Nigel.

One pound from the sale of each book will go to Villa’s chosen charity, Acorns Children’s Hospice. Further information is available from the www.nigelsims.co.uk website.