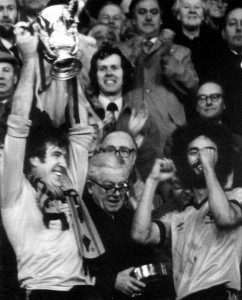 The proudest moment of Emlyn's Wolves career....savoured in full by George Berry.

Try as he might, Emlyn Hughes couldn’t convert his selection for the 1980 European Championships finals into an increase in his impressive tally of England caps.

The veteran defender, who had lifted the League Cup for Wolves a few months earlier, travelled to Italy in Ron Greenwood’s 22-man squad but didn’t kick a ball in the tournament and didn’t represent his country again.

And it was the Italians, like last night, who ended our hopes by beating us 1-0 in Turin with a late goal by the current Republic of Ireland no 2 Marco Tardelli.

Hughes had the likes of Phil Thompson, Dave Watson and Trevor Cherry as competition for a place and remained marooned on the 62-cap mark despite having faced both Scotland and Northern Ireland in that spring’s Home International Championship and gone to Sydney straight afterwards for an England game against Australia.

Glenn Hoddle was also in the Euros party after pipping Albion’s Bryan Robson to the last midfield spot, with Trevor Francis ruled out through injury.

And there was an unconvincing look to the side straight from the off in Italy, with an opening 1-1 Group B draw against Belgium in the same arena, the Stadio Communale, in which Wolves had drawn with Juventus eight years earlier.

In a game marred by crowd trouble and a five-minute hold-up caused by a tear gas attack, Ray Wilkins lobbed England ahead midway through the first half, only for Belgium – like us, unbeaten throughout the qualifying stages – to equalise four minutes later.

The fact that Italy and Spain drew 0-0 in the opening group meant our hopes were still very much alive but they took a dive with Tardelli’s 78th minute strike three days later.

It was the only goal of the game and Belgium beat Spain on the same day, so England needed to win their win their final group game and achieve a significant goal-difference swing over one of the top two.

Even with the six changes made by Greenwood for the meeting with Spain in Naples, there was no place for Hughes, who spoke up both for the radical team selection and for Kevin Keegan amid disappointment at the form of his former Liverpool team-mate.

“He has been under the most tremendous pressure,” he said. “He leaves a drop of orange squash in his glass and they want to know why.

“It has got to him and affected England. When he bubbles, England bubble.  We need fresh legs and a new attitude. We have been disappointing.”

By serving as skipper for the 1980 Home International clash with Northern Ireland in 1980, Hughes had become the fourth player – after Stan Cullis, Billy Wright and Ron Flowers – to captain England while with Wolves.

And he was only the fifth player, following Jesse Pennington, Stanley Matthews, Bobby Charlton and Peter Shilton, to represent the country in three separate decades.

Alas, there was a less celebrated side to his inclusion in Italy. He was England’s only connection with the 1970 World Cup finals in Mexico but his frustration at not kicking a ball in either tournament earned him the ‘honour’ of being England’s most capped player never to feature in a major finals.

By now approaching his 33rd birthday, Hughes remained on the sidelines as Greenwood’s side defeated Spain 2-1 with goals by Trevor Brooking and Tony Woodcock, the 0-0 draw between Belgium and the hosts adding to his discontent.

His informal conduct when teamed with Princess Anne on A Question Of Sport became legendary in his post-playing career but there was another royal link in his life. He missed the first day of pre-season training with Wolves in July, 1980, because he was having lunch with The Queen. He received the OBE the same year, having been voted Footballer of the Year in 1977.

By lifting the League Cup in his two-year, 77-game stay at Molineux, Hughes had won the one major honour that eluded him at Liverpool. But it wasn’t success and smiles all the way. 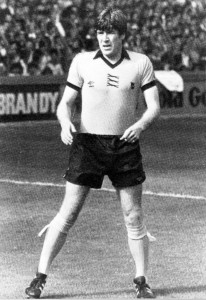 A reassuring sight in a previously leaky Wolves defence.....

Shortly before Wolves’ FA Cup semi-final clash with Tottenham in 1981, he admitted to letting his high standards slip amid his failure to win a regular place back after a mid-season suspension. His poor attitude led to a clash with manager John Barnwell.

“I have been wrong all along the line and the boss was right to get me on the carpet and read the riot act,” he was quoted in the Express & Star as saying. “I should have known better. Instead of buckling down and leading the young lads by example and supporting the seniors, I sulked.”

Hughes died in 2004, aged only 57. He has been named among the top ten Liverpool players of all time in a fans’ poll on the club’s official website and a statue of him stands in his birthplace, Barrow-in-Furness.